Yogi, who was on a visit to a poll-bound state in Assam, made these comments at an election rally at Kalaigaon in Lower Assam. 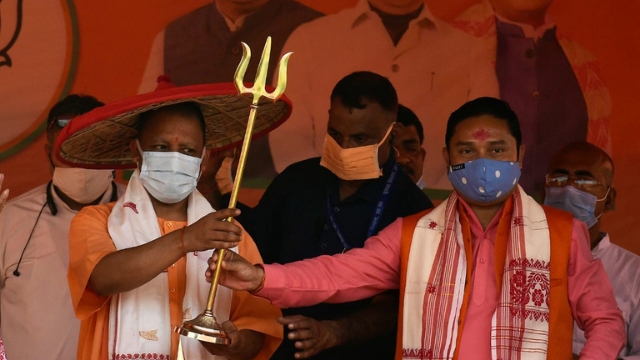 Guwahati: Connecting the vexed issue of illegal migration with the revered 15th century Vaishnavite saint from Assam, BJPs star campaigner and Chief Minister of Uttar Pradesh Yogi Adityanath Thursday said that Srimanta Sankardeva was a visionary, who promoted `cultural nationalism’ and highlighted the issue of infiltration during his time.
Yogi, who was on a visit to a poll-bound state in Assam, made these comments at an election rally at Kalaigaon in Lower Assam.
“How Sankardev freed his motherland from infiltrators…just like that BJP will make Assam infiltration free,” Yogi said.
Launching a scathing attack on Congress, Yogi said that it was Congress who never respected the revered saint Sankardeva for his stand on the infiltration, who was the torchbearer of the neo-Vaishnavite movement in the region.
Yogi said it was due to the conspiracies of the Congress the North East region remained underdeveloped for the last five decades.
Continuing his attack Yogi said Congress never worked for the development and progress of the region or the country’s unity or welfare of the people, but only to grab power. This forced the people here to endure its misrule for a long time and the problem of illegal migration in the area,” he said.
Prime Minister Narendra Modi on the other hand scraped the Look East Policy and implemented it instead of the Act East Policy for the development of the region.
Patting the back of the BJP government in Assam, the Chief Minister said, “In the last six years, there was no discrimination done by the government.”
Yogi said that the people of Assam have to face the wrath of the flood every year. To make the state flood-free in the next five years, the Central Government and the Government of Assam are working together and preparing an action plan in this regard.
BJPs star campaigner Yogi, who was on a one-day visit to poll-bound Assam addressed three rallies, offered prayers at the historic Kamakhya temple before reaching Guwahati in the morning.
He said, “It was really nice to hear the people chanting Jai Shree Ram in Assam the moment they saw me in the temple. It shows a gesture of etiquette and a matter of pride.”