A spokesman of BSF’s Mizoram and Cachar Frontier, with its headquarters at Masimpur near here said, the ‘Maitri Cycle Rally’ was flagged off on January 10 this year from Panitar BOP in West Bengal. 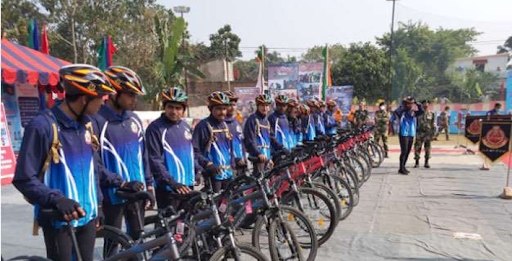 Silchar: The Maitri cycle rally organized by BSF in connection with the celebration of the birth centenary of Bangabandhu Sheikh Mujibur Rahman, of Bangladesh, culminated at Silkore BOP in Mizoram, after travelling more than 4000 km, on Wednesday.

A spokesman of BSF’s Mizoram and Cachar Frontier, with its headquarters at Masimpur near here said the ‘Maitri Cycle Rally’ was flagged off on January 10 this year from Panitar BOP in West Bengal.

The 13 cyclists from the BSF travelled along the international boundary covering the area through West Bengal, Assam, Meghalaya, Tripura and Mizoram and finally culminated at Silkore in Mizoram on its 66th day on Wednesday.

“The purpose and objective of this rally are to commemorate the birth centenary of the Father of the Nation of Bangladesh, Sheikh Mujibur Rahman and to promote and strengthen the bonds of friendship and to enhance the mutual cooperation and trust between the BSF and the BGB. This will also create a sense of security and confidence among the Border population and imparting a message about the ill effects of drug abuse among them”, said Mizoram and Cachar Frontier spokesman Ashok Kumar.

He said, during the journey, the cycle rally was welcomed by the Border Guard Bangladesh officials at many places all along the international boundary and were given warm applause. The border population including school children came forward and extended a warm welcome and organized cultural programmes in honour of the BSF Maitri Cycle Rally.

After reaching the rally at Silkore BOP, which coincides with the Birth Centenary of Sheikh Mujibur Rahman, the border guards hosted a grand closing ceremony.

During this closing ceremony, cultural programmes including Mizo bamboo dance, Chakma and other local dances were performed and displayed BSF Paramotor show. Chief guest, DG Rakesh Asthana presented mementoes to all the participants of this rally and also to the BGB officials.

BGB region commander Brig General Md. Zakir Hossain, conveyed his gratitude for such a gesture by the BSF on the occasion.