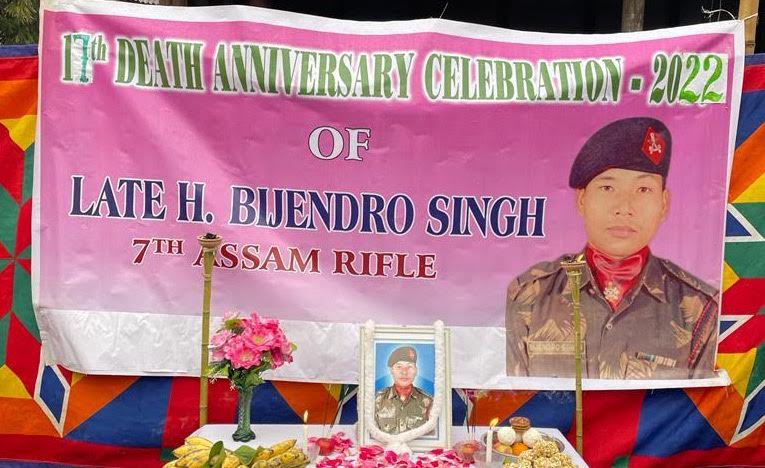 Late Rifleman H B Singh displayed exemplary courage and bravery while fighting the insurgents during a search operation for UNLF cadres at Ningthoukhong Mamang Pat Area, Loktak Lake, Bishnupur, Manipur on December 27, 2005. He achieved veergati due to bullet injury on the thigh, said a statement.

In glorious traditions of the security forces, the brave soldier made supreme sacrifice in the line of duty. The Assam Rifles remembered the sacrifice of the brave heart. The wreath was laid by Manitombi Devi, mother of the rifleman at Wabagai. A felicitation ceremony was also organised for family members, said a press note from PRO, IGAR(S).

Phundrei Battalion of Assam Rifles also organised the distribution of Educational Aids for visually impaired children at “The Mission Blind School” under Operation Sadbhavana project for the year 2022-23 in Chandel District (Manipur) on December 26, 2022.

‘The Mission Blind School’ is a boarding school for Visually Impaired children who had been neglected by our society. The school is completely dependent on voluntary donations and faces a shortage of basic amenities for the kids. The initiative taken by Assam Rifles by distributing educational aids to the kids proves its motto of “Friends of the hill people”.

This camp was organised since the people in the region do not have access to any medical facilities. Even the basic medical care facilities are available in the area of District HQ at Kamjong.

A total of 128 Villagers (52 male, 41 female & 35 children) from Wanglee & nearby villages were examined, and provided with medical advice and medicines.