The flood situation in Assam has turned more severe with the death toll increasing to 62 with eight new deaths being reported on Saturday. 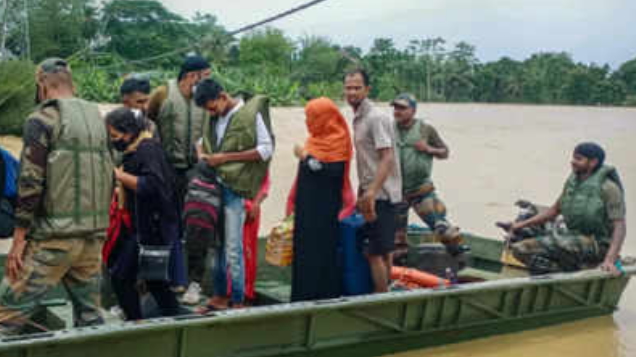 Guwahati: Indian Army is carrying out relief operations in flood-hit Assam in a massive way and so far has rescued more than 3 thousand affected people in Assam.

The army troopers have been carrying out flood relief operations in Hojai, Baksa, Nalbari, Barpeta, Darrang, Tamulpur and Kamrup of Assam, a statement said.

The army has deployed as many as eleven composite columns at various locations of Assam for flood relief operations.

“As heavy rains continued to lash the various parts of Assam, rivers rising above dangerous levels causing floods and inundation across rural and urban areas, the men in uniform provide a helping hand,” the statement added.

The flood situation in Assam has turned more severe with the death toll increasing to 62 with eight new deaths being reported on Saturday.

As per the latest damage report by Assam State Disaster Management Authority (ASDMA), a total

of 32 districts in the state including 118 revenue circles have been affected by the ongoing flood.

The ASDMA stated that 8 human lives were lost in the last 24 hours and the total number of human lives lost stand at 62 human lives (51 in Flood & 11 in Landslide).

As of Saturday, 514 relief camps and 302 relief distribution centres have been opened in all affected areas.