The changes will come into effect from June 28. 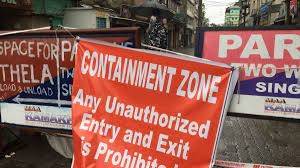 Guwahati: In order to control the surge of COVID-19 cases, Assam government has declared three districts of the state as containment zones, while relaxing norms in those districts where cases have shown a downward trend.
Due to rise in COVID-19 infection, complete lockdown has been imposed in Golapara, Morigan, Biswanath Chariali and Bokhkhat subdivision.
Meanwhile, curfew timings have been relaxed in Kamrup Metro. Areas under the district will remain open from 5 am to 4 pm, while the shops will be allowed to function till 3 pm. For other districts, existing SOP’s will continue unchanged.
The changes will come into effect from June 28.
Announcing these measures, Health Minister Keshab Mahanta said that 247 COVID-19 hotspots have been identified across the state where the positivity rate is over 10 per cent.
He also informed that out of 600 COVID-19 samples that were tested, 77 per cent of them have been detected with new delta variants.
Moreover, the Minister also said that people who have taken two doses of vaccine need not get tested at railway stations and airports, provided they produce the certificate.