The decision was reached at the highest political level of the state, and around 20 militants, including the outfit's chief M Batha, will lay down their arms at Lalpani in Udalguri district, the PTI reported. 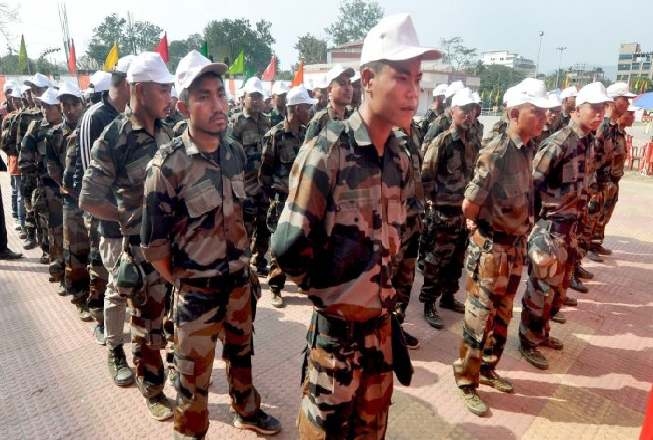 The decision was reached at the highest political level of the state, and around 20 militants, including the outfit’s chief M Batha, will lay down their arms at Lalpani in Udalguri district, the PTI reported.

The group was floated after some disgruntled cadres of the erstwhile militant outfit National Democratic Front of Boroland (NDFB) returned to the forest. NLFB is active mostly in the BTR.

The surrendered NLFB militants will be received by Bodoland Territorial Council (BTC) chief Pramod Boro at Lalpani and they will be brought to Guwahati later in the day after completing all formalities at Majbat in Udalguri.

“People’s trust in the Govt policies is reflected by NLFB’s decision to return to the mainstream today. I welcome their homecoming,” Sarma tweeted.

He said that the Assam government is committed to the all-round development of BTR and will protect the unique socio-cultural and political identity of the Bodo people.

Sharing a video footage of the militants walking through a narrow jungle path, Sarma tweeted, “Further peace dawns in BTR with the homecoming of NFLB top cadres to mainstream. A great leap forward towards a peaceful Assam. Sharing live visuals of the event.”

Since its formation a few months ago, one member was killed in a police encounter and 27 others have been arrested, an Assam Police source said.

“This peace deal is an initiative at the political level, mainly by the chief minister. We have got information that M Batha will also surrender,” he added.

Batha, a former NDFB militant, was among the 1,615 insurgents from all the factions of the NDFB who had laid down their arms on January 30 last year after the signing of the third Bodo Peace Accord.

However, he was not satisfied with the implementation of the accord, and later went underground after the Bodoland Territorial Council (BTC) polls in December 2020.

He then announced the formation of the NLFB, which has mostly been involved in extortion in the BTR.

Meanwhile, BTC chief Pramod Boro said that the BTR will be free from all insurgent activities after the surrender of the NLFB militants.

“After the third Bodo Peace Accord, our region had become insurgency-free. But due to some misunderstanding, Batha and a few others returned to the jungle,” he told PTI while on the way to receive the militants.

This is a joint effort between the Assam government and the BTC administration that resulted in this move towards peace, Boro said.

Asked how many cadres will lay down their arms, the BTC chief said, “We have got information that NLFB has around 20 cadres and all of them will surrender. I will take them to Guwahati to keep them in the safe custody of Assam Police.”

The All Bodo Students’ Union (ABSU), United Bodo People’s Organisation (UBPO) and all the factions of the NDFB had signed the third Bodo Peace Accord with the Centre and Assam government on January 27 last year, ending years of violence.

The accord provided political and economic bonanza to the Bodoland region sans a separate state or Union territory.

A total of 3,439 militants of different groups have surrendered in Assamsince 2016 , Sarma had said in the state Assembly on July 12.