Agartala-Akhaura railway line to open in a year

The track-laying work across the 15.054 km stretch that would connect Agartala with Akhaura in Bangladesh by railway was scheduled to be completed by March 2019 but has got delayed by over three years as of now. 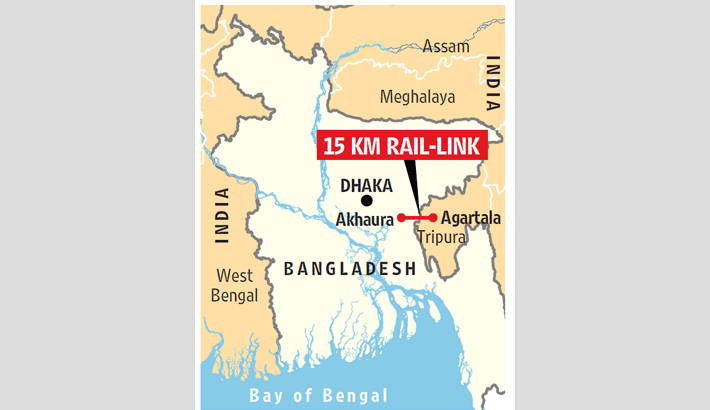 Agartala: The Ministry of Railways has been working in mission mode to complete the track-laying work of a 15-km stretch of the Agartala-Akhaura railway line to connect Bangladesh within a year, said Union Minister of State for Finance Pankaj Chaudhary on Monday after his two-day visit to Tripura.

Chaudhary inspected the ongoing work and visited the international immigration station and railway yard at Nischintapur along the India-Bangladesh border on Sunday followed by interaction with the railway officials and the officials of the state government.

The track-laying work across the 15.054 km stretch that would connect Agartala with Akhaura in Bangladesh by railway was scheduled to be completed by March 2019 but has got delayed by over three years as of now. A stretch of five km is on the Indian side and the rest in Bangladesh but the expenditure for total construction including in Bangladesh part is being borne by India.

The minister said the Agartala–Akhaura railway line constructed by the Indian government through IRCON will shorten the travelling time between Tripura and Kolkata.

After completion of this project, it will be a gateway to the entire northeast, which will facilitate larger business opportunities for the entire Asian region.

“During the inspection, I found all the works are being done in a good way and the construction will be finished within the revised timeline. The route will be operational soon and hopefully it will take around a year,” Chaudhury said, adding that the quality of work and speed of the execution of the project are satisfactory, but need to accelerate further to meet the timeline.

The ambitious India-Bangladesh railway connectivity project is expected to reduce travel time between Agartala and Kolkata via Dhaka to 10 hours from 31 hours since the route would effectively shorten the distance from 1,600 km to 550 km.

Recently, the daily bus service between Agartala and Kolkata via Dhaka resumed after a three-year break due to Covid19.

However, goods transport to Tripura, Mizoram, Western Manipur and Southern Assam are solely dependent on the chicken-neck corridor in Siliguri (in northern West Bengal) via the hilly road stretch of North Cachar Hills of Assam and the high-terrain of Meghalaya, which creates problems every monsoon.