Commenting over Congress leader Anand Sharma`s remarks on the alliance with Indian Secular Front (ISF), Chowdhury said, "We`re in charge of a state and don`t take any decision on our own without any permission." 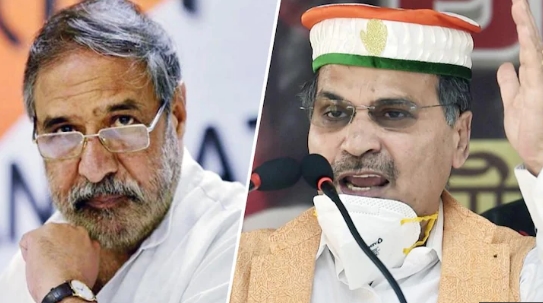 Kolkata: West Bengal Pradesh Congress Committee (WBPCC) president and party’s Lok Sabha leader Adhir Ranjan Chowdhury on Tuesday offered this unflattering appraisal in response to allegations that the party, by allying with a powerful Muslim cleric in Bengal, has abandoned its long-held commitment to secularism.

Commenting over Congress leader Anand Sharma`s remarks on the alliance with Indian Secular Front (ISF), Chowdhury said, “We`re in charge of a state and don`t take any decision on our own without any permission.”

Chowdhury has retorted that those openly attacking him are in fact looking for greener pastures. “They thought to appease the party who may offer something for their bright future. He has said that his party will contest on 92 seats in the upcoming West Bengal Assembly election 2021.

Addressing a joint Congress-Left-ISF press conference in Kolkata, Chowdhury said, “As per the discussions held with the Left so far, 92 seats have been finalised for the Congress to contest in the upcoming West Bengal Assembly elections. The list of candidates for these seats will be announced in two days.”

Earlier, Sharma had tweeted that “alliance with ISF and other such parties is against the ideology of the Congress and should have been discussed at the Congress Working Committee (CWC).”

He tweeted, “Congress cannot be selective in fighting communalists but must do so in all its manifestations, irrespective of religion and colour. The presence and endorsement West Bengal PCC President is painful and shameful, he must clarify Mr Chowdhury said he would urge “a select group of distinguished Congressmen to rise above always seeking personal comfort spots” and stop singing praises of Prime Minister Narendra Modi.

He appeared to refer to Mr Sharma as well as Ghulam Nabi Azad, who said he felt “proud” of leaders like PM Modi. Both are part of the Congress dissidents’ group known as the “G-23”, which has routinely criticized party decisions since it wrote a controversial letter calling for “full-time and visible leadership” in the party, apparently targeting the Gandhis. “Would urge a select group of distinguished Congressmen to rise above always seeking personal comfort spots & stop wasting time singing praises of PM. They owe a duty to strengthen the Party and not undermine the tree that nurtured them,” Mr Chowdhury posted.

He also said the Congress was a part of the CPI(M)-led Left Front in Bengal, which was “determined to defeat BJP”. Calling the decision of the front “communal” would only play into the hands of the BJP, he commented.

Chowdhury also said those committed to fight against the BJP’s “venomous communalism” should support the Congress ad campaign for it in five states instead of undermining it.

The thread was widely circulated and drew many comments. The BJP expressed mock-pity for the Congress leader

“Such is the burden of loyalty that he despite being PCC President, floor leader in LS and a former Union Minister gets insulted on stage, yet he is made to live with this insult and defend communal elements. What a pitiable position to be in,” the BJP tweeted, sharing the thread

This internal rift in the grand old party comes at a time when cracks have already begun to emerge in the CPM-Congress-ISF alliance in Bengal over seat-sharing. The Congress has reportedly refused to leave even a single seat in its strongholds Malda and Murshidabad, a move that has irked Abbas Siddiqui, the political greenhorn.