Everything is designed by the Lord. So, it is Him alone who should be praised and worshipped. He is everywhere and He is the cause of everything. The poet completely surrenders himself to God. 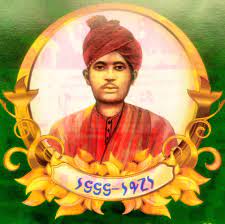 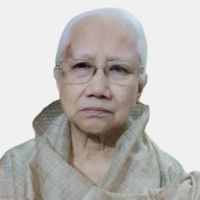 The poem is religious in the sense that it contains a theological theme. It is at times interspersed with devotional lyrics. The poet seeks to highlight the status of Sidaba Mapu and narrates the process of creation and his work of safeguarding his creation. The poet is of the opinion that the Lord should be praised and worshipped. He completely surrenders himself to the Lord.

In his religious epic Paradise Lost unlike Naoriya, Milton introduces the theme of his poem at the very outset.

Of man’s first disobedience, and the fruit

Of that forbidden tree, whose mortal taste.

Brought death into the World, and all our woe.

He then goes on to invoke the Goddess muse for his intuition, through a Christian poem.

Naoriya, however, begins with his wakening up of the devotees that words from the Lord have arrived. He also invokes the Lord and the Lairembi. The poem consists of fourteen sections. The first is the introduction which is also the invocation and the last section is the conclusion of the poem. The invocation is a prayer to the Lord, not the heathen Goddess Muse as Milton does.

As pointed out earlier, the first section serves as the invocation in the form of awakening the Lord and the Goddess. With the morning everything is enlivened. There is merrymaking with dance and song for the Lord. The poet awakens the devotees to listen to the sermon of the Lord. He prays God to forgive him for all his trespasses and bless him with prosperity.

Naoriya begins the second section by paying obeisance to the Lord. He says that God incarnates for the well-being of his creations Taiabgn oina phaobani.

Human beings too are praising the Lord. He refers to the appearance of the Lord. No definite form of the Lord could be established and it is due to the creative mind of the human beings that a form is assigned to him.

He asks the Lord for his blessings and to lead him to the Lord.

In the third section, the poet says that the Lord avoids incarnation. Mapok leitaba sageini. The Lord is the main element of the five elements: water, air, earth, sky and wind. He blooms alone with innumerable petals. He is the only one with many facets.

The poet ends this section with a prayer too.

We will get salvation if we chant His name. So says the poet and he himself prays to God.

The next section begins with praises of the Lord using oxymorons where opposites are placed together.

Everything is designed by the Lord. So, it is Him alone who should be praised and worshipped. He is everywhere and He is the cause of everything. The poet completely surrenders himself to God.

In the next section, the poet writes of the devastation prevailing in the universe in the absence of the Lord. In the end, he surrenders himself to God.

The seventh section starts with a prayer to the Lord who nurtures all living entities. Here he brings in Lainingthou who is flourishing because of Sidaba Mapu. The world flourishes because of Him, the Lord. The main river is full to the brim. The trees are loaded with fruits and human beings are leading a welfare life. The poet prays for the well-being of life on earth.

The next section deals with the origin of life. The poet begins with the prevailing harmony. On the peak of Koubru hill, in the golden palace, Lainingthou is on the right and Lairembi on the left. They are being served by thousands of maids. There is a garden on all sides. A tranquil atmosphere prevails. Lairembi then enquired of Lainingthou the origin of human beings. There is the sun differentiating light from the darkness. The poet also mentions other entities of the universe with a ruler to look over everything. He mentions of the existence of rivers male and female

Lainingthou then starts narrating the performance of Ipuroi the Lord of things and events related to the Lord. Apokpa is the Lord of all beings. He is the beginning. He is the end. He is the creator. He is also the destroyer. He extends himself to curdle all things to himself. He submerged himself in the water and tried to procure the earth taking the form of a fish. Feeling the necessity of greater strength, he takes the form of a tortoise and finally that of a boar. Here reference can be made to the Hindu theology where Vishnu transformed himself into three forms: once as a fish to save living beings from the great flood; once as a tortoise to help in churning nectar, and once as a boar to save the Earth from a demon. Hiranyaksha. But for Sidaba Mapu, the transformation is for one event only.

The creation is extended to other entities. The Lord is content with the existence of water and land. Out of his sweat there emerge demons and from his body the insects. The demons spread far and wide. He decides to eliminate them. In the form of a lion, the Lord calms himself and brings forth wind and fire. His five elements are combined to form one essence. His will cause the existence of all the others: Eebudhougi pukningna pumnamaksu oikhiye. If people listen to this story they become wiser and shall be able to cross all difficulties. He concludes this section with a prayer.

In the ninth section, the poet offers his obeisance, the poet states that things will be predicted through Lairembi. Creation has already taken place.

He moves away to discuss the merits of devotion to God, then what constitutes good behaviour and finally who attains heaven. He describes the attributes of the Lord. His will never goes in vain. The river when it flows into a vast stretch of water loses its name. The water evaporates to cool down and comes down as rain. So is Epuroi. What emerges from him emerges in him again. The five elements: air, water, wind, earth and sky make up a body. When the body is dissolved, air gets mixed with air, water with water etc. However, when a fixed amount of water is poured into a vast stretch of water, the same water is not scooped up. So it’s life. Let us promise the Lord, so does the poet.

The Lord is the mingling of seven colours. Black is the colour of all shadows. The core colour is white. The core of all living things is the Lord. He is like the peepal tree. The branches are under and the roots are up in the air in contrast to the natural habit. The root is the Lord and the branches are the human beings. There are sufficient parts of the body with nine openings; the parts of the body with their functions are described. There are also negative qualities: the venial sins which are lust, greed and pride.

The river starts from its source and ends at its mouth. All the tributaries fall into the mouth. All is Apokpa’s creation. Naoriya prays to the Lord to give him strength and knowledge.

In the eleventh section, Lainingthou again reminds Lairembi that He is the incarnation of Epuroi (Apokpa). He also refers to the importance of Lairembi. She is so delighted that her face becomes radiant. Here ensued a quarrel between the bird (tha-een) and the bee and the poet narrates the quarrel in a lyrical form. Repetition of the couplet:

Four times make realize the lyrical form. There are other reputations of other couplets as well. The devotees of the Lord now come to know that Lainingthou is the incarnation of Apokpa and Lairembi that of Sidabi.

In the thirteenth section, Lairembi enquired of the differentiation of colours. The Lord’s body is made up of enormous organs. In the inside of the body prevails a spacious area. Here are innumerable entities, one depending on the other. It is His drama that there are many suns and moons and stars. There is a land each where the sun rises. There are varieties of colours, white leads other colours like black, red, etc. The poet then brings in certain deviations, consisting of good behaviour. Sidab Mapu dwells on the lotus flower in his palace. A human being is steadfast in his service to the Lord and he is rewarded. His issues continue the worship. There are varieties in the breeding. Those with good breeding have nice growth, while those with feeble upbringing decay soon. The Lord’s blessings will remove all worries and sorrow.

The last section makes up the concluding part. The section starts with the poet asking Lainingthou to take rest. After this tired journey, the sun has set. The cows and birds are returned to their respective places. The companions of Lairembi put up a dance. Let us praise Sidaba. In the end of the poem, the poet asks for God’s grace. He sings that God should take his seat.

The poem Tengbangba Amasung Lainingthou Laipao is a religious poem, at times interspersed with devotional songs. It contains, besides theological themes, teachings and references. He expresses his complete faith in the Lord. While praising Taibangmapu he also seeks blessings and asks others to do so.

Naoriya uses poetic tools in his poetry to enhance the meaning and intensify mood and feelings. In the lines, he lets contain an equal number of syllables to create rhythm.

The lines also serve as an example of a couplet and rhyme scheme. Alliteration is often used throughout the poem.

He often makes use of analogy:

He uses images to describe life and death:

In the portrayal of the smiling face of Lairembi, the poet brings in the image of the radiance of the full moon. Then a conversation ensued between a bird (tha-een) and a bee. The quarrel contains a lyrical note. There is repetition of a couplet  three times:

The poet sometimes contradicts himself. In section 2, He incarnates:

But in section 3, the poet writes:

The first section of this collection serves as the introduction and the last section as the conclusion. There is as such, in the poem unity of composition.

The author is a former Principal of DM College of Arts and a former Chairperson of Board of Secondary Education, Manipur (BOSEM)