The Chief Minister expressed profound happiness for the support received from village chiefs from across the state and also said that with chiefs of Tengnoupal and Chandel also declaring their support, we may consider that the whole border area has been covered. 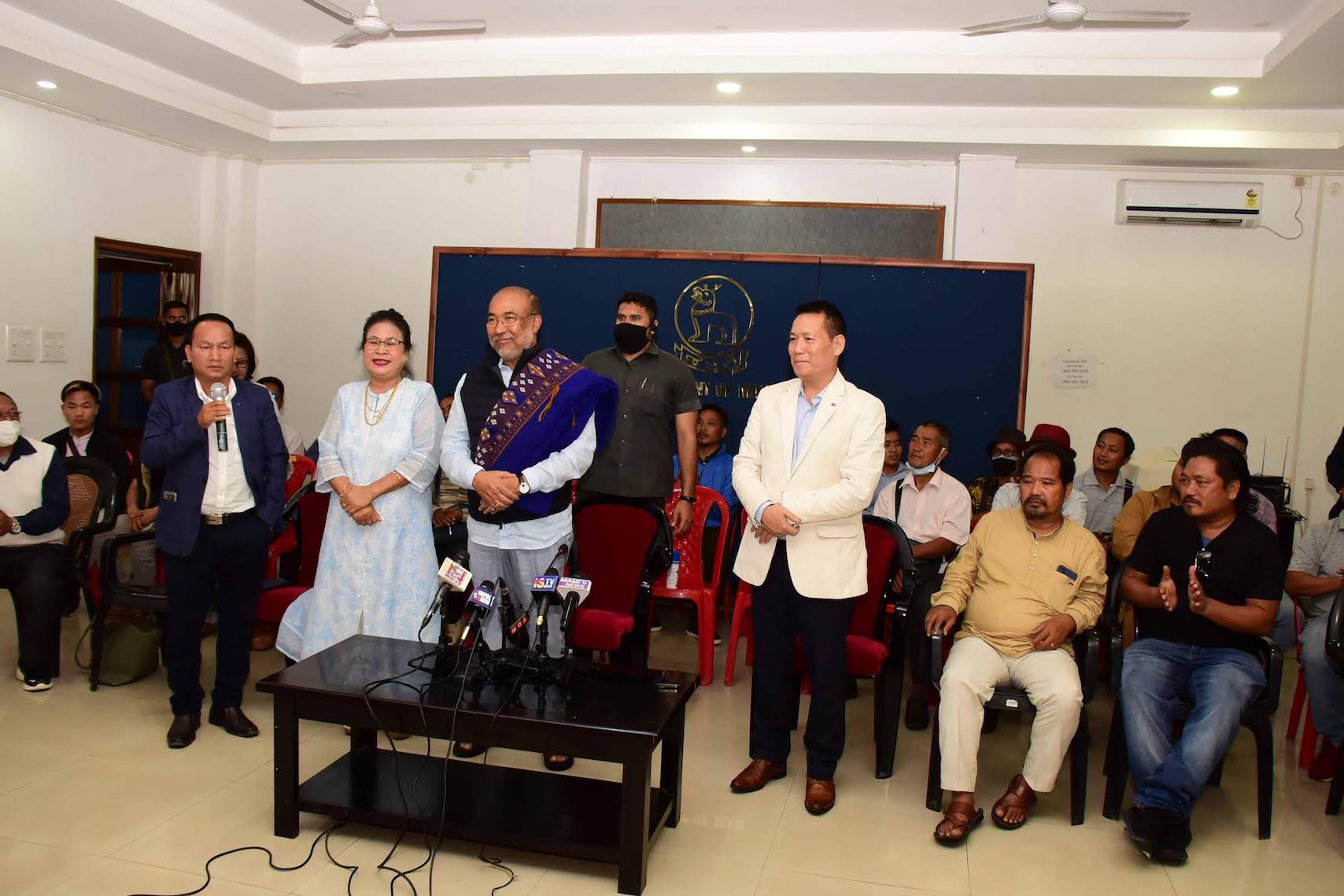 Imphal: The Chief Minister’s War on Drugs has gained more momentum as several Civil Society Organisations and Village Chiefs are declaring support to ensure the eradication of poppy plantations from their areas.

On Saturday evening, village chiefs of Tengnoupal and Chandel under the Kuki Chief Association led by Minister Horticulture and Soil Conservation Letpao Haokip declared their full support to the Chief Minister’s War on Drugs and efforts to eradicate poppy plantations from their areas.

Chief Minister N. Biren Singh, flanked by Minister Horticulture and Soil Conservation, Letpao Haokip, and the chiefs held a press conference in this regard Saturday evening at the Darbar Hall, Chief Minister’s Secretariat.

The Chief Minister expressed profound happiness for the support received from village chiefs from across the state and also said that with chiefs of Tengnoupal and Chandel also declaring their support, we may consider that the whole border area has been covered.

CM Biren Singh asserted that he understands the issue raised by the chiefs over none deliverance of scheme benefits in the far-flung border areas leading to taking up poppy plantations for their livelihood. The Chief Minister assured responsibility to ensure that the benefits of government schemes reach the far-flung border areas, and also said that the chiefs, on their part, should ensure the total eradication of poppy plantations from their areas.

Assuring all assistance from the government, the Chief Minister said that the Horticulture and Social Conservation and Tribal Affairs & Hills departments were given to Minister Letpao Haokip with the understanding that he will bring some positive changes in the poppy plantation affected areas of the hills.

Highlighting an issue raised by one of the chiefs regarding Myanmar nationals entering illegally and planting poppy, the Chief Minister praised the chief for his sincerity in raising the issue and assured to look into it. He said such illegal entry of Myanmar nationals is creating misunderstanding among the indigenous populace.

He further appealed to all sections of society to stop making communal comments against one another on social media platforms.

During the press conference, the Chief Minister also explained that the 1891 Anglo-Manipur War had many battlefields, and the government is constructing a Tengnoupal Battle Memorial Park at Tengnoupal at the earliest and observe Anglo Manipuri War at Tengnoupal and Mayang Imphal also starting from next year.

Replying to a media query on the steps taken up along the Myanmar border, the Chief Minister said that many steps have been taken up. He explained that fencing for around 100 km along the vulnerable areas has already been approved, drone surveys will be started along the border, special commandos are already stationed in the areas, and there is preparation to set up around 14 new police stations with outposts.

The Chief Minister further called on all to join hands to completely eradicate the drug menace from the State.

Minister Letpao Haokip said that 32 chiefs of villages from Tengnoupal and Chandel mainly affected by poppy plantation have today come out in support of the Chief Minister’s War on Drugs campaign. These village chiefs have come forward understanding the ills that poppy plantation is causing to our society including its effect on health, soil due to the use of chemicals, etc.

He welcomed the village chiefs for their support and said they are on the right path. He also assured them to look into means for their alternative livelihood.

The village chiefs declared to put an immediate hold on poppy cultivation in their areas and at the same time approached the government to arrange alternative livelihood as well as to ensure that the benefits of government schemes reach the interior parts of the State. They also highlighted the ills of poppy plantations including ecological imbalances due to mass deforestation of poppy plantations. KCA, Tengnoupal also assured to organize a seminar to spread awareness among the villagers on the ills of the poppy plantation. They also assured full cooperation and support to the war against drug campaign and to lead from the front.