A Covid Care unit doctor assaulted by mob in Assam

State Chief Minister Himanta Biswa Sarma called it a 'barbaric' attack and ordered the Assam Police to arrest the culprits. 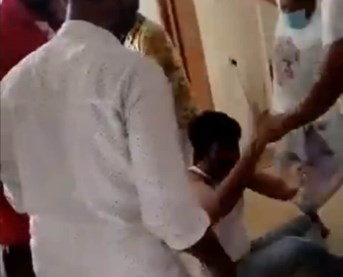 Guwahati: A junior doctor at a Covid Care Centre (CCC) in Assam was beaten up by a mob on Tuesday after a Covid-19 patient died during the treatment.

Three persons have been arrested. The video of the assault has gone viral, evoking sharp response from the doctor community and others.

The incident took place at a Covid Care Center in Hojai district in central Assam. The Indian Medical Association of Hojai unit has called for a total boycott of works till the all the culprits are arrested.

State Chief Minister Himanta Biswa Sarma called it a ‘barbaric’ attack and ordered the Assam Police to arrest the culprits.

Dr Seuj Kumar Senapati, who was posted at Udali CCC in Hojai district of central Assam, was attacked by nearly 20 relatives of the patient including women.