Fire Force units from Alathur and Vadakancherry rushed to the spot and carried out rescue operation. 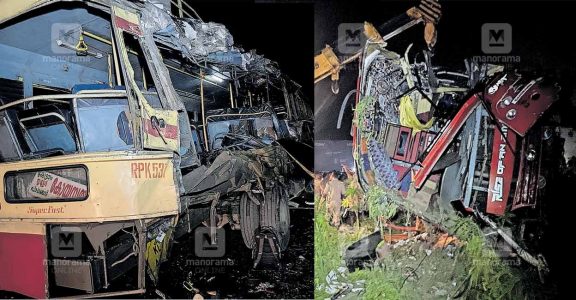 Palakkad: In a major road accident, nine persons were killed and 40 sustained injuries when a tourist bus hit behind a state-owned KSRTC bus at Mangalam near Vadakkancherry in this district of Kerala at 12.05 am on Thursday.

The KSRTC bus which was going to Coimbatore from Kottarakkara overturned and plunged into a wetland after it was hit by the tourist bus, carrying 42 students and 5 teachers of Mar Basile’s Vidyaniketan School in Ernakulam, which was going to Ooty.

All the injured, 10 of them serious, were admitted to various hospitals including Palakkad District Hospital, Thrissur Medical College, Alathur Taluk hospital and a private hospital in Vadakkanchery.

Fire Force units from Alathur and Vadakancherry rushed to the spot and carried out rescue operation.