The KU further affirmed that there will be ‘non-cooperation with the Indian Military Forces for violating the ‘Eastern Nagaland Peoples’ Organization (ENPO) Declaration’ of December 18, 2007, that stated ‘there will be no bloodshed in ENPO area.’ 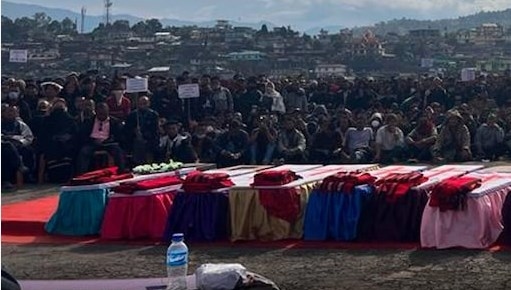 Kohima: The Konyak Union, the apex tribal body of Konyak tribe in Mon district of Nagaland has declared a seven-day public mourning period in the entire district in memory and respect to the persons, who were killed by the security forces in a mistaken identity at Oting village of the District on December 4 and declared “Mon District Bandh” today.

According to sources in Konyak Union (KU), a meeting was held in the office of the Konyak Union took the resolutions and submitted a memorandum to the President of India, following the incident in of the December 4 Oting firing and the violent clashes in Mon town Headquarter on December 5 incidents in which 14 lives were lost and several others injured. The KU also declared December 4 and 5 as ‘Black Day’ and said it would continue to observe the same every year.

The KU further affirmed that there will be ‘non-cooperation with the Indian Military Forces for violating the ‘Eastern Nagaland Peoples’ Organization (ENPO) Declaration’ of December 18, 2007, that stated ‘there will be no bloodshed in ENPO area.’ Sources said during the seven-day mourning KU warned and banned the movement of military forces or patrolling parties; failing to abide by this decision and untoward incidents that arise during this stipulated time, they shall be held responsible.

The KU condemned the incidents; the Union demanded remedial actions including repeal of the contentious Armed Forces Special Powers Act (AFSPA), 1958 from the entire North East Region and removal of the 27 Assam Rifles from Mon district on moral ground for failing to provide security to its citizens whereby the military forces from other State.

The KU also asked the Nagaland Directorate of School Education has informed that the examinations scheduled from December 6 onwards, have been deferred till further orders.