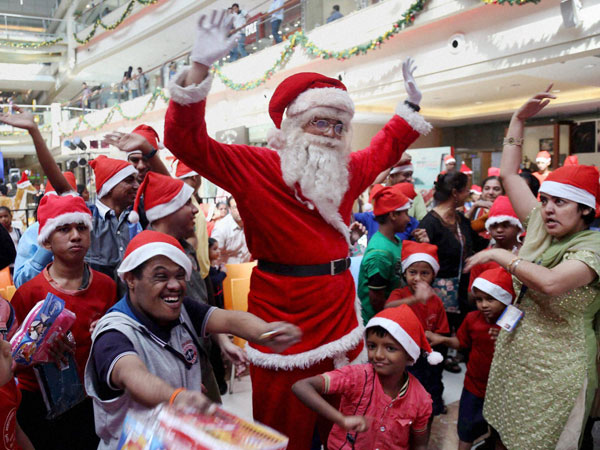 Chennai:Christmas, the festival marking the birth
of Jesus Christ, was celebrated with religious fervour, traditional
gaiety and enthusiasm by the Christians in Tamil Nadu today.
As church bells tolled signalling the moment of Nativity, faithfuls
converged for the midnight mass in cathedrals and churches as
senior bishops and priests delivered the Christmas message.
After a low key celebrations during the last two years due to
COVID pandemic, X-mas was celebrated in a grandeur way
this year.

Christians attired in new clothes thronged the churches for
special masses and exchanged greetings with others.

In some Churches,special masses were held to protect the
people from the new variant of COVID-19, BF.7, a sub-lineage
of BA.5 variant of Omicron have seen a surge in some countries.
All the churches were tastefully decorated and illuminated to
mark the occasion.

The largest congregation was held at the Santhome Basilica in
the city.

A midnight mass was conducted at the historic Punitha Arokia Matha
(Velankanni Maadha) church (Shrine Basilica of Our Lady of Health)
at Velankanni in Nagapattinam district, in which a large number of
devotees and pilgrims took part.

Southern Railway and Tamil Nadu State Express Transport Corporation
operated special trains and buses to enable people to visit Velankanni
and also to their native places as the Christmas festivity coincided with
the half yearly exam vacation.