PHED Minister, Losii Dikho, speaking as the chief guest of the observance said that the present government is emphasizing the health sector for the betterment of people 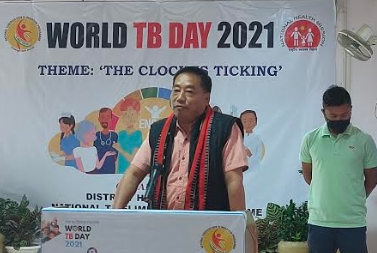 PHED Minister, Losii Dikho, speaking as the chief guest of the observance said that the present government is emphasizing the health sector for the betterment of people. Recalling his childhood, he said that he has a deep admiration of doctors and health workers for their immense services for the well-being of society. On the occasion of the 40th World TB Day, the minister appealed to all the members present to take an active part in eliminating the disease. He also applauded the district health workers for their immense contributions.

Deputy Commissioner, Senapati, Th Kirankumar, in his presidential speech stated that the main focus in the district toward the TB elimination is the notification through blood test, X- Ray detection, writing down the name of the person purchasing the medicine in pharmacies and reporting suspected TB persons to health workers like ASHA. He said the prevalence of the diseases can be reduced much more in the district if proper advantage is taken of the available facilities. He also suggested that Health Worker, CSO’s Village leaders and Anganwadi workers should join hands for tactical mock drill exercise. He appealed to all not to shy away from declaring oneself as a TB patient as the treatment of TB is available free of cost.

Chief Medical Officer, Senapati, Dr Pfokreho Pfoze, in his speech as the guest of honour highlighted the mandatory TB notification gazette for private practitioners, chemists and public health staff under Revised National Tuberculosis Control Programme which was notified by Ministry of Health and Family Welfare, Government of India. He also appealed to the gathering, especially the health workers, to take active initiative in notifying the TB patients to DTO.

It may be mentioned that World TB Day is observed every year on 24th March since 1882 to commemorate the discovery of Mycobacterium tuberculosis causing Tuberculosis by Dr Robert Koch. It is also observed to create awareness about TB and mobilize political and social commitment to fight against it. India is the highest TB burden country in the world with 2.69 million incidences and 44000 death. TB, a contagious disease that spread through air droplets can also be prevented through face masks. The Government of India has committed to end TB by 2025, i.e.  five years ahead of the Global targets under SDGs. Due to the ambitious target name of the programme and its logo has been changed from RNTCP to NTEP in 2020. Several initiatives have also been implemented like ACF, use of newer and shorter regimen, private sector engagement, NPY, expansion of the diagnostic network, digital intervention.

Later, there was Role Play/ Drama competition where Bendramai PHC was announced the winner while Tadubi PHC and Maram were declared second and third respectively. Besides, there was a testimonial speech and incentive was given to the survivor of TB disease.

The programme was attended by DLO’s, Various CSO’s, Health Workers like ASHA and survivors of the contagious disease.

Biometric attendance system to be mandatory from June 1 in Manipur