Women of Assam should file a fraud case against CM Himanta: Gaurav Gogoi

Waiver of microfinance loans was one of the major promises of the BJP in the run-up to the elections in the state. 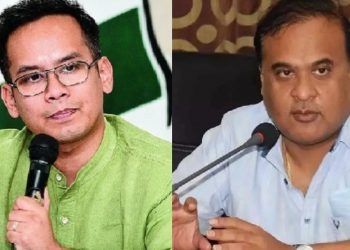 Launching a scathing attack on nearly two-month-old BJP led government in Assam, Gogoi said before elections the Assam CM had promised women of the State complete waiver of micro-finance loans. But after the elections, the CM informed that only a section of loans would be waived which is fraud with women of the state.

Waiver of microfinance loans was one of the major promises of the BJP in the run-up to the elections in the state.

“I would like to see women of the State filing fraud case against CM Himanta Biswa Sarma for not fulfilling poll promises,” Mr Gogoi said in a virtual press meet here.

Mr Gogoi said that the Assam chief Minister must focus on the works in his hand, rather than breaking other parties.

He alleged that the BJP Government in Assam has been trying to expand its syndicates, which is why they want a silent opposition. So, they are trying to break the opposition parties.

Delving on the recent remarks on population control policy, he said that CM Himanta Biswa Sarma is trying to follow the footsteps of Uttar Pradesh Chief Minister Yogi Adityanath.

Gogoi also accused the Assam CM of `misleading’ the people of the State in regards to Niti Aayog’s SDG indexing of States.

In the recently released index, Assam ranked lowest, 28th for women empowerment in the category of gender parity and equality. Economically, Assam has the lowest score in the entire Northeast. Assam’s rank dropped from 17 in 2019 to 22 in 2020.