Angela Rangad, who is known for fighting for the rights of the marginalised people, is on a second straight consecutive day protest in front of the gate where Chief Minister Conrad Sangma and his council of ministers sit. 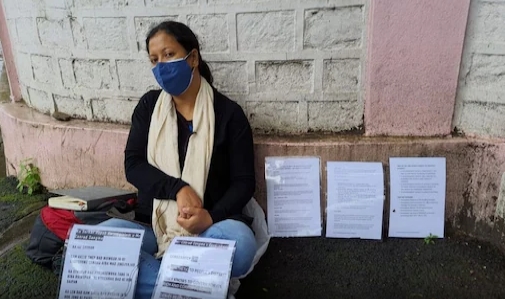 Shillong: A civil rights activist is staging a lone protest in front of the gate at the main secretariat in Meghalaya capital Shillong demanding the release of COVID 19 financial assistance meant for the marginalised labourers in the State.
Angela Rangad, who is known for fighting for the rights of the marginalised people, is on a second straight consecutive day protest in front of the gate where Chief Minister Conrad Sangma and his council of ministers sit.
Interestingly, neither the Chief Minister nor anyone of the Council of Ministers have spoken to her or urged her to withdraw her protest.
“I am sitting here every day during office hours to remind the government that it should immediately release the money to the labourers,” Rangad said.
“I will continue to sit here till the government releases the financial aid to all the beneficiaries and justifies its claim that there is no scam since many of the labourers have not received the financial aid,” she said.
In March 2020, the Meghalaya government had announced financial assistance for unorganised sector workers under the Chief Minister’s Relief Against Wage Loss (CMRAWL) in view of the Coronavirus lockdown.
An amount of Rs 2,100 for three weeks was to be given to each daily wage labourer, hawker and domestic worker (Rs 700 per week).
Rangad said that the government has claimed that Rs 52 crore was sanctioned for the financial assistance for the marginalized workers but “more than 50 per cent is unaccounted for.”
“Poor families are the worst sufferers and those who are unfortunately infected with COVID-19, got the shock of their life with mounting medical bills. That is why, I have to sit here (in front of the secretariat) to remind the Government of its duty, especially during this pandemic when people are suffering as the economic activities have come to a standstill,” she said.
Rangad said that when she followed up to know if the marginalised people have received the financial assistance or not, she found out that they did not receive.
She had also sought the information from the Labour department under the RTI Act in November 2020, which revealed that many of those who had submitted their applications did not find their names in the list, and those whose names were on the list, did not either get any money or received only Rs 1400 or Rs 700.
“The government and the Deputy Chief Minister, Prestone Tynsong cheated the people when he claimed that the account numbers of the beneficiaries were either incorrect or inactive,” she alleged.
“How can he (Deputy Chief Minister) say that the account numbers of the beneficiaries were wrong or not active when the labourers who had received Rs 700 last year, did not receive the remaining amount till now?” Rangad questioned.
Similarly, Rs 5000 was to be given to each labourer registered under the Meghalaya Building and Other Construction Workers Welfare Board (MBOCWWB).
TUR and the Workers Power of Meghalaya (WPM) had submitted their first 1400-page complaint to the Chief Minister and demanded immediate release in full of the financial assistance to the
labourers who have not received.
She also demanded an independent and time-bound enquiry into the implementation of this scheme.
After Rangad raised the issue, the Labour Department had on June 14 this year, published two phone numbers for people to lodge their grievances.
However, Tynsong had denied irregularities or scam in the utilisation of the financial assistance meant for the daily wage labourers.