Yet, some "tiny dictators" in the country are trying to suppress it by employing different mechanisms, said the renowned human rights activist 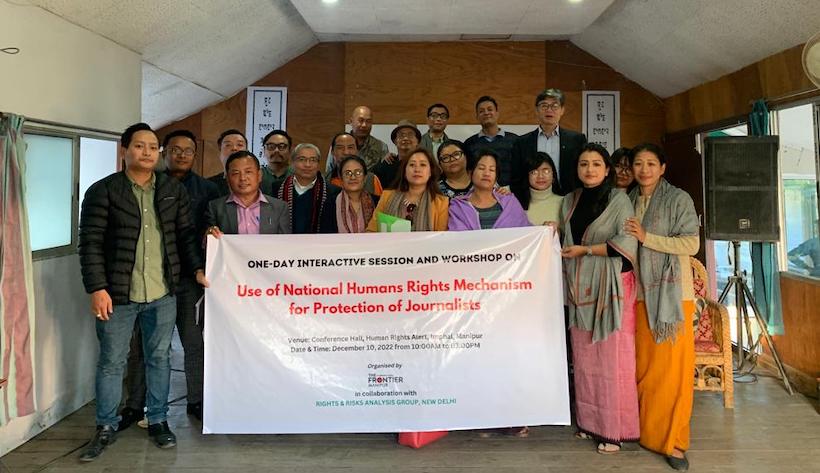 Imphal: The press and media are the first line of defence in the fight for freedom of expression. Yet, some “tiny dictators” in the country are trying to suppress it by employing different mechanisms, said Suhas Chakma, renowned human rights activist, here on Saturday.

“They are trying to shut down the entire media platform, but what they didn’t realise is that without press freedom, society will just collapse,” said Chakma, while participating in a one-day interactive session and workshop on ‘Use of National Human Rights Mechanisms for Protection of Journalists,” organised by The Frontier Manipur, in association with the Rights and Risks Analysis Group, a Delhi-based rights group.

Citing the report of the World Press Freedom Index (WPFI), Chakma said India’s press freedom ranking has been falling down continuously since 2014, now stood from 142  in 2021 to 150 this year, which is of grave concern.

He said the problem faced by the media is increasing every year, but it’s never been considered a problem by many. Sometimes, journalists have to defend themselves even though they work for organisations with limited deadlines. Even so-called human rights activities, he added, have not been subjected to such harassment and persecution.

Chakma further said that Assam, Manipur, and Tripura have reported the largest number of cases relating to journalists in the northeast. The activist urged the journalist community to utilise different guidelines and tools, including those of the National Human Rights Commission, Press Council of India, and other national commissions, to protect themselves from different actors.

The rights activist also lamented that many digital media have not been given due recognition by many press bodies and governments. He also predicted that almost all print media will be gone in the next 10–15 years. It’s time to accept the realities and dynamics that have been involved over the years.

Babloo Loitongbam, Director, Human Rights Alert, Manipur, highlighted the importance and principle of the Universal Declaration of Human Rights, which is observed across the world on Saturday, 10th December, every year.