We leave Australia with disappointment in our hearts: Kohli

After the T20 World Cup campaign, India will tour to New Zealand for a six-match white-ball series, starting from November 18. 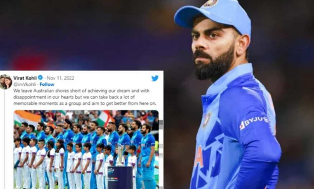 Alex Hales and Jos Buttler unbeaten stand of 170 to help England defeat India by 10 wickets in the second semifinal in Adelaide on Thursday.

Taking to his social media, Kohli wrote: “We leave Australian shores short of achieving our dream and with disappointment in our hearts but we can take back a lot of memorable moments as a group and aim to get better from here on.

“Thank you to all our fans who turned up in huge numbers throughout to support us in the stadiums. Always feel proud to wear this jersey and represent our country.”

Kohli is the leading scorer of the tournament with 296 runs and also has an highest average of 98.66.

Star all-rounder Hardik Pandya, who took on the English bowlers towards the end and galvanised India to post a par score, said he is Devastated, gutted, hurt.

“Devastated, gutted, hurt. Tough to take, for all of us. To my teammates, I’ve enjoyed the bond that we built – we fought for each other every step of the way. Thank you to our support staff for their endless dedication and hardwork for months on end,” Pandya tweeted.

“To our fans who backed us everywhere we went, we’re forever grateful. It wasn’t meant to be but we’ll reflect and keep fighting,” he added.

Suryakumar Yadav, who was one of the standout performers in this year’s T20 World Cup, too wrote heartfelt message on Social media.

“Hurtful loss. So close, yet so far. Grateful to our fans who create electrifying atmosphere, no matter where in the world we are. Thankful and proud of the unending support for each other and the hardwork put in by this team and support staff. Proud to play for my country. We will reflect and come back stronger,” said Yadav.

After the T20 World Cup campaign, India will tour to New Zealand for a six-match white-ball series, starting from November 18.