‘We can make difference with the quality of Indian players in our squad’: Manuel Marquez

Marquez cautioned his players ahead of a challenging game against NorthEast United and wants them to not get carried away with the team's recent results. 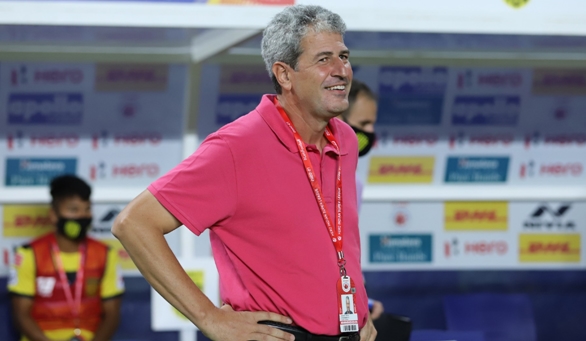 Bambolim: Hyderabad FC head coach Manuel Marquez urged his team to be focused on the pitch while also stressing the need for improvement as his side faces NorthEast United FC on matchday 28 of the Hero Indian Super League (ISL) 2021-22 season on Monday at the Athletic Stadium in Bambolim.

Marquez cautioned his players ahead of a challenging game against NorthEast United and wants them to not get carried away with the team’s recent results.

With some of the most talented young players in the Hero ISL at his disposal, Marquez also stated that there is immense scope for improvement for the youngsters.

Addressing the media ahead of their clash with NorthEast United FC, Marquez said,” We’re happy with all the players, all the foreign players. I don’t know about the opinion of the other coaches, but the difference lies in the Indian players because you have to play at least seven Indian players and it matters. If you have a top scorer like Angulo Igor or Krishna Roy, it’s a great asset for the team.”

“But for me, at this moment, the difference is the quality of the Indian players. Of course, it’s a learning stage and there are and will be a lot of mistakes but like everything in life, you have to learn about this, and I think several players will improve after this season. I repeat, I am delighted with our foreign players, but the key lies in the Indian players,” he said.

Marquez said, “I’ve trained various young teams and B teams, and some players are more mature than other players. One player is mature when is 18 whereas the other player matures when he’s 22and this depends heavily on the character of the player.”

If you don’t have a strong mentality, you can only play one or two seasons but in the end, you won’t arrive at the top level. This is one thing that we have to work on, and I think that several young players in ISL are improving in mentality,” he said.

“It’s good for us to win and keep a clean sheet, it was important. We had a good first half, and in the second half, we had more problems because Bengaluru FC tried to equalise the game, they attacked a lot of players in the last 20 minutes of the match, but I think we deserved it it the three points,” Marquez said.

He said, ” We have several young players, many of which will be even better in the future, but you cannot play with 11 young players, they have to play with experienced players beside them and I believe this mix of players is significant for our team.”

“I disagree that NorthEast United are in their worst run of form. They played a quality game in some moments. I don’t think they deserved to lose against Odisha. Regarding my team, as I always say, every team will be difficult, every team can beat their opponent,” Marquez said.

“I’m sure that Monday’s game will be a difficult one for both sides. The style of NorthEast United is good, they have quality foreign players, and the Indian players are very disciplined too,” he said.