He joined the HNLC in 2010 and after receiving arms training, he was actively involved with the unlawful activities of the outfit. 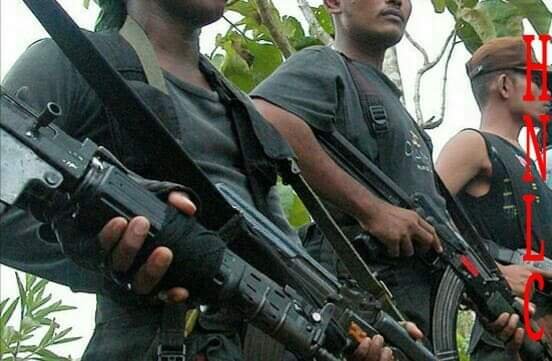 Junel Tongper alias June, who was the “East Jaintia Hills Area Commander” of the HNLC joined the mainstream in a surrender ceremony before Inderjit Singh Rana, the Inspector General of the BSF’s Meghalaya Frontier at Umkiang border outpost in East Jaintia Hills district.

He joined the HNLC in 2010 and after receiving arms training, he was actively involved with the unlawful activities of the outfit. He was based at Panaipunjee under Kulaura police station of Moulvibazar district of Bangladesh.

Stating that he was “misled,” by the outfit, Tongper said he was an unemployed youth when he joined the outfit and was “misguided” like other youths like him.

Meanwhile the BSF said it took quite some effort to counsel the militant to join the mainstream by leaving the outfit’s unlawful activities. The BSF’s intelligence wing was constantly in touch with Tongper for almost a year before being able to convince him to leave the outfit.

The BSF also confirmed that several youths like Tongper have been exploited and lured into the outfit by the HNLC due to their economic hardship and their simplicity and innocence. These youths were then engaged in the outfit’s unlawful activities.

The BSF further added that it would be providing such misguided youths like Tongper skill development and vocational training and also provide remuneration after their surrender.

Rana on the other hand said, militancy in the state has prevailed in the state due to the economic hardship and also due to lack of employment opportunities. He nonetheless urged the youths not to

fall victim to such ploy and also urged the local population to work in tandem with the BSF in fighting militancy.

force, the armed forces so that they can lead a respectable life and put an end to their economic hardship.

The HNLC, which runs hit-and-run operations from its hideout in Bangladesh, has been demanding

a sovereign Hynniewtrep homeland in Meghalaya.

Meghalaya shares a 443 km-long border with Bangadesh, part of which is porous, hilly and

unfenced and prone to frequent infiltrations.