The launching programme was organized by National Health Mission, Manipur under the 100 Days Action Plan of the New Government in celebration of 75 years Azadi Ka Amrit Mahotsav. 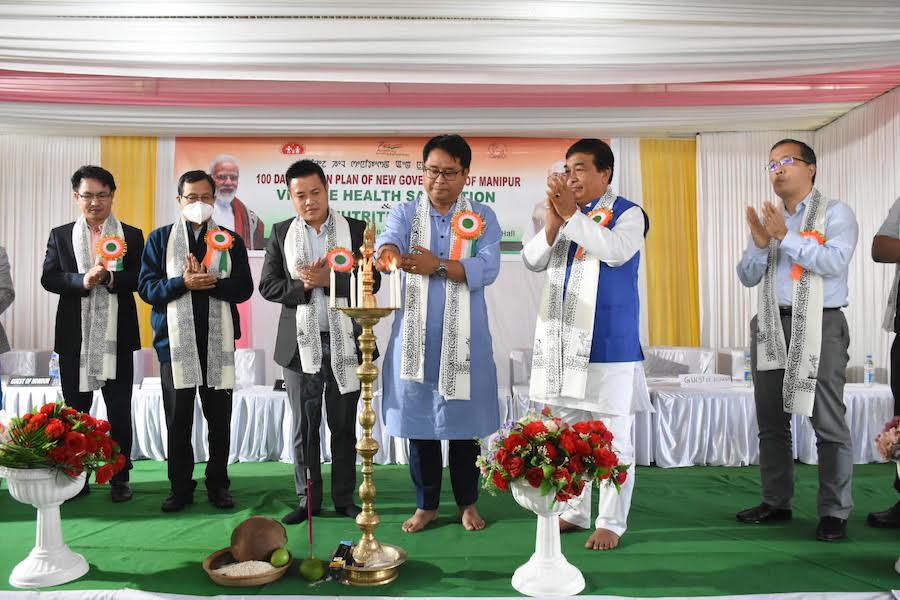 The launching programme was organized by National Health Mission, Manipur under the 100 Days Action Plan of the New Government in celebration of 75 years Azadi Ka Amrit Mahotsav.

Stating that for a healthy society, we need to maintain a healthy lifestyle, the Minister said that it can be achieved when we acquire the knowledge of various aspects of health care and nutrition to protect from various diseases and malnutrition.

Dr. Sapam Ranjan Singh stated that if the schemes taken up by the government for the welfare of the people are not followed properly, it will affect the future generation of the state. He said that nutrition is a much-needed source of a healthy life and one needs to know when and how to consume nutritional diets by pregnant women for the health of both mother and baby. He urged the people especially the women to take care of health as their primary duty.

He added that the programme has been held to promote the health care system in the state and asked the people to avail the facilities provided by the government. Further, he highlighted the importance of the ASHAs and the Anganwadi workers in creating awareness and educating the people in rural areas for a healthy lifestyle.

Minister also said that the health care system would be improved if there is awareness of the various aspects and importance of health sector such as the importance of immunisation, consumption of nutritional diets etc. The government is targeting on the grass root development of the primary health care system and if needed cooperation from the various departments of the state will be sought for the overall development of the health sector, he added.

Shri V. Vumlunmang, IAS, Additional Chief Secretary, Government of Manipur, addressing the gathering as a special guest, said that the Village Health Sanitation & Nutrition Day (VHSND) is important programme for creating awareness on health and nutrition. He said that the programme needs to be organized regularly every month to create awareness and provide services regarding health and nutrition. VHSND will be a useful programme as Health Department, National Health Mission and Social Welfare Department are collaborating, he added.

A booklet on Village Health, Sanitation & Nutrition Day (VHSND) which includes the schedule for VHSNDs was also released at the launching ceremony.

VHSND is being implemented across the country since 2007 as a community platform, connecting the community and health care systems and facilitating convergent actions. It attempts to bring health, early childhood development, nutrition and sanitation services to the doorstep and promote community engagement for improved health and wellbeing.

One of the 100 days action points for the first 100 days is to organize village health sanitation and nutrition days in 25 per cent of the total villages in the State. It has to be conducted monthly in the identified villages by the Health Department in coordination with Social Welfare Department. Altogether 1125 VHSNDs are to be conducted from May 17, 2022, onwards as part of the 100 Days Action Plan for the Financial Year 2022-23 to provide momentum to the new government to serve the people of Manipur effectively throughout the five years.