Video exposes graft, groups in K’taka Cong ahead of byelections

The video depicts a conversation between former Parliamentarian VS Ugrappa and KPCC Media Coordinator M Salim before/after a press conference held at the KPCC office Tuesday . 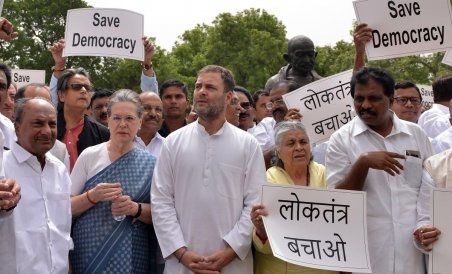 Bengaluru: Ahead of byelections in the state, Karnataka Congress on Wednesday faced a major embarrassment as its leaders disclosed crores of rupees amassed by KPCC President DK Shivakumar and his aides by means of corruption as depicted in a video that has gone viral on social media.

The video depicts a conversation between former Parliamentarian VS Ugrappa and KPCC Media Coordinator M Salim before/after a press conference held at the KPCC office Tuesday .

Salim is heard saying that Shivakumar is a “collection giraki” (cash collector) and alleged that he made more than Rs 53 crores through corrupt means. He is also heard saying that the KPCC President speaks like a drunkard, but Opposition Leader Siddaramaiah speaks with a stentorian voice.

On the other hand, Ugrappa is heard saying that Shivakumar has not delivered as KPCC president, though he and other leaders had proposed his name for the coveted post. He also clarified that he does not agree with Salim’s corruption charges against Shivakumar and did not speak anything negative against the KPCC president.

“Shivakumar is a very authentic leader and whatever wealth he has amassed has been through his business. He is not corrupt in any way,” he said. He further clarified that his remarks on Shivakumar’s performance should not be taken in a negative sense. “It only meant that Shivakumar could have performed even better,” he added.

In a damage control act, KPCC Working President Saleem Ahmed said the party has suspended Salim for his disparaging comments and action would be taken against Ugrappa if he is found guilty of anti-party activities. He swept the corruption charges levelled by Salim against Shivakumar under the carpet by saying that it was a private conversation and the allegations made thereof are baseless.

Taking advantage of the development, Karnataka BJP, in their Twitter handle, hinted at the fissures in the Congress party, alleging that the video could be a part of a master plan orchestrated by Siddaramaiah to overthrow Shivakumar from the post.”Shivakumar’s own leaders have poured water on his dreams of becoming chief minister. They are raising questions over his ability to lead in the capacity of KPCC President. Are these remarks a part of Siddaramaiah’s long-drawn master plan to overthrow Shivakumar from the post,” the party tweeted.

“Whenever Siddaramaiah returns from Delhi, a conspiracy surfaces in the public domain by way of releasing a matter, a video in this case. The one who levelled allegations against Shivakumar is a disciple of Siddaramaiah,” BJP said.
The party also said the allegations made by Congress leaders against Shivakumar are haunting the people of the state. “Shivakumar, your boys have Rs 50 to Rs 100 crores, so how much you (Shivakumar) would be having? This question is haunting the people of the state,” it said.

Karnataka BJP President Nalin Kumar Kateel said the conversation proves the indulgence of Congress in corruption. He also said the Congress leaders themselves have disowned Shivakumar’s allegations that raids on his properties by ED or CBI are politically motivated.”People are convinced that the IT and CBI probe on him (Shivakumar) is not politically motivated. Because Congress leaders themselves are admitting that they have amassed Rs 50 to Rs 100 crore by corrupt means,” Kateel said.

“Your very own @INCKarnataka leaders have called you a THIEF during a press conference. Are you a THIEF? Did you take 12% BRIBE? Did you share this LOOT with your party owners? Will you please clarify?” it added. Karnataka Congress has been divided into two groups and each group is driving its own agenda. One group is loyal to former chief minister Siddaramaiah, one belongs to Shivakumar’s camp.

Kendrapara:The decomposed body of a male 17.8 feet long male estuarine crocodile was fished out by the forest personnel...
Nation