Khordha district with a high daily covid load recorded the highest TPR of 3.5 per cent followed by Cuttack ( 1.3 per cent). The other 28 districts in the state registered the TPR less than one per cent. 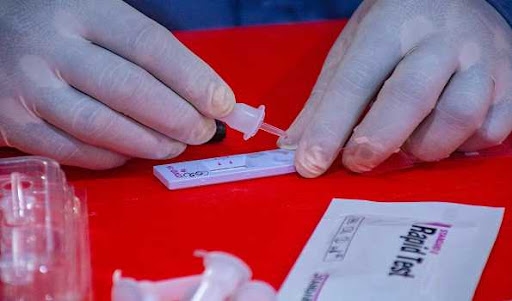 Bhubaneswar, Oct 13 (UNI) The daily covid load in Odisha again witnessed a rising trend as 615 new cases were detected from 22 districts in the state in the past 24 hours taking the total tally to 10,32,288.

However, the daily covid load on October 11 again rose to 529 which further increased to 615 on October 12 indicating a very fluctuating trend of up and down in daily covid cases in the state.

Health and Family welfare department sources said in the past 24 hours 357 cases were recorded from the quarantine centres and 258 as local contact cases As many as 68 positive cases were reported in the age group of 0-18 years.

Sources said 546 covid patients were recovered on Tuesday pushing the total recoveries in the state to 10,19,764 while the death toll further increased to 8268 with seven more cases being reported from five districts during the ongoing health audit of covid deaths.

The daily test positivity rate(TPR) in the state continued to remain below one per cent for the last several days. In the past 24 hours, it stood at 0.98 per cent as out of 62,675 tests 615 had tested covid positive. On Tuesday the TPR was 0.94 per cent

Khordha district with a high daily covid load recorded the highest TPR of 3.5 per cent followed by Cuttack ( 1.3 per cent). The other 28 districts in the state registered the TPR less than one per cent.

Chief Minister Naveen Patnaik while conveying best wishes to all on the occasion of auspicious Durga Puja, urged the people to join in the worship of the mother safely, following Covid guidelines. Patnaik wished every life to be filled with happiness and prosperity by the immense mercy of Mother Durga.