Agartala was the launchpad for Operation Cactus Lilly and the epicentre of military and political planning for the Bangladesh liberation war. 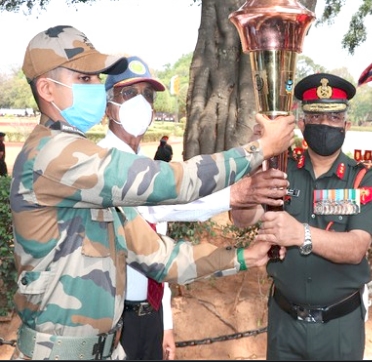 Agartala: Hundreds of students along with Padmasree Gymnast Dipa Karmakar have welcomed the Swarnim Vijay Varsh victory flame of the Indian Army here this morning, which has travelled almost over a year throughout the cities and villages across the country including the native places of Param Vir Chakra and Maha Vir Chakra awardees of 1971 War.

As many as four victory flames were lit by Prime Minister Narendra Modi on Dec 16 last year at National War Memorial to commemorate the golden jubilee of the Indian Armed Forces victory in the 1971 Indo-Pak War. The victory flame will be received with full military honour at 57 Mountain Artillery Brigade tomorrow after it will be brought to Rabindra Bhawan following a Vijay Prarikrama in the city.

Artillery Brigade is scheduled to organise a commemorative event in the city including a cultural show, combined forces brand display, 1971 War gallery and military equipment display along with felicitation of Veer Naris and veterans of Bangladesh liberation war. The victory flame will bid adieu to Agartala on Nov 9 next after it is honoured by 21 Assam Rifles, BSF, CRPF and state police.

The arrival of the victory flame in Agartala was marked by the wreath-laying ceremony wherein a homage was paid to the martyrs of the 1971 war by civil-military dignitaries at Albert Ekka War Memorial here. Lance Naik Ekka was martyred in the battle of Gangasagar, near Agartala along the Indo-Bangladesh border during the Indo-Pak war.

“The valiant act of Lance Naik Ekka and his team had saved Agartala from Pakistani forces. The fearless and spirited people of the state worked as fighters, provided inputs about enemy locations and were helping Indian forces besides providing shelter and assistance to the displaced brethren from East Pakistan,” the army statement said.