The Uzbek government has extended the e-Visa facility to Indian tourists, he informed the delegation, a release on Friday said. 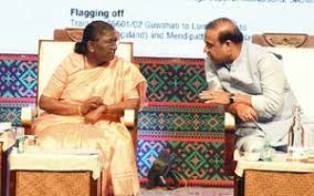 Hyderabad: Dilshod Akhmatova, Ambassador of Uzbekistan to India has said that Uzbekistan required thousands of English-teaching Indian teachers to teach in their schools.

Interacting with the Federation of Telangana Chambers of Commerce and Industry (FTCCI) Tourism Committee delegation after it called on him at a private hotel here on Thursday, Dilshod Akhmatova said both countries– India and Uzbekistan– share a common culture, heritage, civilization, Tradition, and language.

Nearly 5,000 words in the Uzbek language are similar to the popular languages spoken in India. He highlighted a few areas of cooperation between India and Uzbekistan.

The Uzbek government has extended the e-Visa facility to Indian tourists, he informed the delegation, a release on Friday said.

The Ambassador said Uzbekistan has also emerged as a significant source of medical tourism with about 8,000 Uzbeks annually seeking medical treatment in India.
He said the two delegations comprising Uzbekistan Doctors are getting trained currently at AIG Hospital and Yashoda Hospital in Hyderabad.

My purpose for this second visit to the city is to visit these hospitals as our doctors are getting trained, Dilshod said, adding that he was also in Hyderabad to explore possibilities for strengthening their relationship with Telangana.

Dilshod Akhmatova also highlighted that they were actively pursuing sister-city ties with Hyderabad. The sister city agreement between Bukhara city and Hyderabad would be done in near future. This will ensure the mutual exchange of art and culture, education, and trade between the cities.
Stating that Uzbekistan invited the Hyderabad film industry, the Ambassador said We will even pursue incentives if any are required to encourage them to do film shootings in Uzbekistan.

Telangana has huge opportunities and potential in IT, Pharma, Tourism, Healthcare, and Training. We need English teachers to teach English in Uzbekistan. We would like to attract them. We are also exploring the possibility of rolling out a pilot project for the same. We need thousands of teachers, he said.
I have met Srikanth Sinha, CEO of TASK (Telangana Academy for Skill and Knowledge). We are also exploring possibilities of collaboration for skill development training.
We would like to utilize the Indian experience in Make in India, an initiative by the Government of India. We too would like to replicate this initiative to make and encourage companies to develop, manufacture and assemble products made in Uzbekistan, he said.
In 2023, we are expecting 1.5 lakh Indian tourists to visit Uzbekistan, he added.