“The constitution makes no reference to abortion, and no such right is implicitly protected by any constitutional provision,” the majority opinion said. 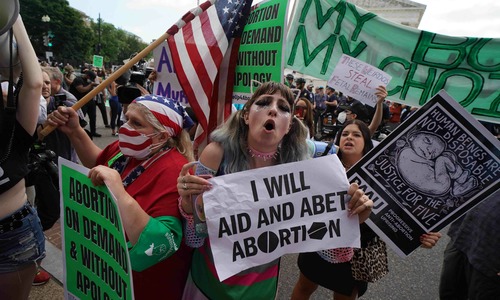 Washington:  The US Supreme Court on Friday overturned Roe v. Wade, a landmark decision that established a constitutional right to abortion in the nation nearly 50 years ago.

“We hold that Roe and Casey must be overruled,” said the majority opinion, written by Justice Samuel Alito. Alito was joined by five other conservatives on the bench. The court’s three liberal justices dissented.

“The constitution makes no reference to abortion, and no such right is implicitly protected by any constitutional provision,” the majority opinion said.

“With sorrow — for this Court, but more, for the many millions of American women who have today lost a fundamental constitutional protection — we dissent,” the dissenting opinion read.

The judgement will transform abortion rights in America, with individual states now able to ban the procedure.

The ruling came after the Supreme Court had considered an appeal case involving a Mississippi law banning all abortions over 15 weeks’ gestational age except in certain circumstances.

Demonstrators both for or against abortion rights are gathering near the U.S. Supreme Court on Capitol Hill.

“Protesters are allowed to peacefully demonstrate, however they must follow the officers’ instructions so that everyone stays safe,” the Capitol Police tweeted.

The landmark 1973 Roe v Wade case saw the Supreme Court rule by a vote of seven to two that a woman’s right to terminate her pregnancy was protected by the US constitution, reports BBC.

The ruling gave American women an absolute right to an abortion in the first three months (trimester) of pregnancy, but allowed for restrictions in the second trimester and for prohibitions in the third.

But in the decades since, anti-abortion rulings have gradually pared back access in more than a dozen states.

According to the report, Friday’s ruling amounts to a wholesale reversal of the Supreme Court’s own legal precedent – an extremely rare move – and is likely to set up political battles that divide the nation.