As expected, the match turned out to be a thriller with both the teams fighting neck to neck and giving their best in front of the packed stadium. The crowd got behind the players and cheered every good move, especially if it was from the local boys. 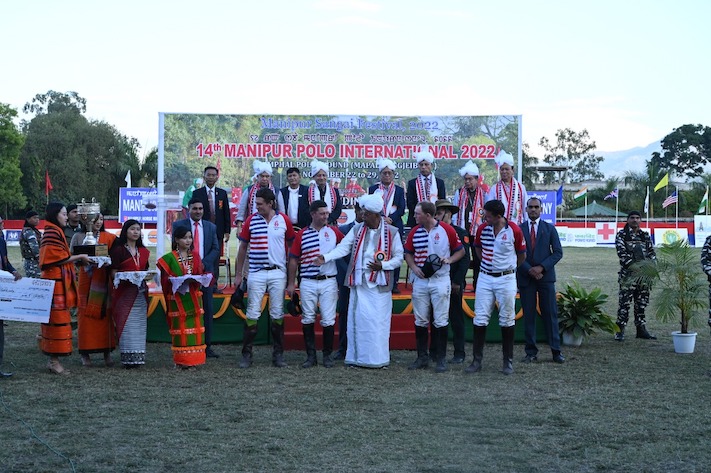 As expected, the match turned out to be a thriller with both the teams fighting neck to neck and giving their best in front of the packed stadium. The crowd got behind the players and cheered every good move, especially if it was from the local boys.

The match began on an encouraging note for the Manipur team with P Ojit opening the account almost as soon as the match began (24th second). T Atangba then added two more goals for Manipur to pull ahead 3-0 but towards the latter half of the 1st chukker, Phil Seller added three goals in the 5.03rd minute, 5.31st minute and 6.08th minute to level the score. The second goal came from a 40 yard hit and the third from a penalty. In the 7.00th minute, L Atangba scored a beautiful goal from the middle of the field for Manipur to lead 4-3 at the end of the chukker.

The 2nd chukker was where the Manipur team lost the game. The UK team dominated this chukker completely pumping in as many as five goals with no reply from the Manipur side. Phil Seller scored thrice (1.28th minute, 2.43rd minute and 7.00th minute) and Harry Tucker twice (0.15th minute and 6.55th minute). At the end of the 2nd chukker, the UK team led 8-4,

In the 3rd and 4th game, the Manipur team made some sort of a comeback but it was rather late in the day. The 3rd chukker was evenly matched with both the teams scoring a goal apiece. Phil seller scored once again for UK in the 2.19th minute from a penalty stroke while L Atangba scored for Manipur in the 3.03rd minute. At the end of this chukker, UK led 9 goals to 5 goals.

T he Manipur team made a very strong comeback in the last chukker with P Ojit scoring twice in the .52nd minute and 6.22nd minute while L Atangba scored in the beginning of the chukker (.18th minute). Phil Seller added yet another goal to his team’s tally in the 2.08th minute. The UK team won the match 10-8 to lift the 14th Manipur Polo International trophy.

“It is an incredible feeling”, said Phil Seller who has been a prolific scorer for UK. According to Phil, “the team played amazing polo, we gave 100 percent”.   Though he believes luck also played its fair part, he credits the win to the fact that they were well prepared and to the fact that “every player worked for each other and left the ball for the best person”.  As to the reason behind his prolific run in this tournament, phil says the key to it is his ability to keep calm under pressure.

“My boys played well but luck was not on our side today,” opined Bimol, Manipur team coach, pointing to about four occasions when they came very close to scoring and missed.  A little lack of understanding between the Manipuri players in the 2nd chukker, Bimol believes cost them the match, giving credit to the UK team, Bimol said they played well and that the UK players are very disciplined.