Pradyot is also very close to Tripura CM Biplab Kumar Deb and whenever he gets a chance, passes time with Chief Minister to protect his personal interest. But in Delhi and outside, he is against BJP.” 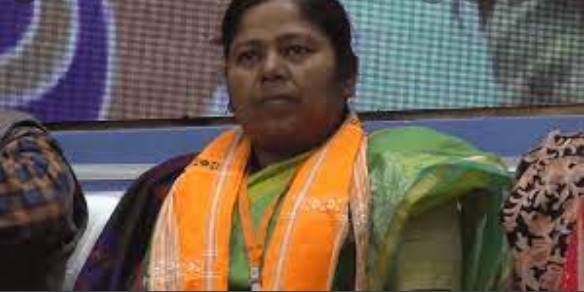 Agartala: The senior BJP leader and Union Minister of State for Social Justice and Empowerment Pratima Bhoumik came down heavily on Tripura royal scion Pradyot Kishore Debbarman for his Greater Tipraland movement and accused him (Pradyot) and his team of making indigenous people fool to secure their interest.

Recently, Pradyot Kishore’s party TIPRA Motha, BJP’s ally in the government IPFT and a few other local parties and organisations had held demonstrations at Jantar Mantar in Delhi with about 2000 tribals from Tripura to press for the demand for a separate state. Allegedly, the leaders have made distorted statements on the demographic profile of Tripura intended to activate communal sentiment.

Pradyot Kishore has also come under the fury of the ruling BJP following his reaction over the killing of two senior officers of Tripura State Rifles belonging to the tribal community by a non-tribal jawan last week on service-related issues. The senior police officers have also expressed their resentment at the attempt of communalisation of the incident allegedly by a group of Pradyot’s followers.

According to the report, during a demonstration in Delhi Pradyot Kishore and other tribal leaders had alleged due to the continuous infiltration of non-tribals from Bangladesh reduced the indigenous people to minority and now the figure dropped down to 24 per cent, which enraged Central minister Pratima Bhoumik and accused Pradyot of instigating communal sentiment with cooked data.

“The tribal population in Tripura still remained at 31 per cent and Prime Minister Narendra Modi has taken multiple initiatives for the development of indigenous communities and upliftment of their socio-economic, cultural and educational status. The BJP government in Tripura has made path-breaking steps in the last three years and several initiatives have been undertaken for the overall development of tribals but a few leaders like Pradyot Kishore are misguiding the innocent minds,” Bhoumik said.

She alleged, “Pradyot Kishore has dual character – in Delhi, he criticised BJP and is maintaining rapport with opposition parties. In Tripura, he talks against CPI-M because he knows here nobody likes CPI-M. Unless he proves himself anti-left nobody will support him.

Pradyot is also very close to Tripura CM Biplab Kumar Deb and whenever he gets a chance, passes time with Chief Minister to protect his personal interest. But in Delhi and outside, he is against BJP.”

Reacting to the Greater Tipraland movement, Bhoumik said the demand itself is divisive and unjustified, which in no way helps tribals to develop. A few highly aspiring tribal leaders used the innocent people for their political interest and personal gain and added, “Our Prime Minister is working for inclusive development for strengthening country’s integration and prosperity where these people are persuading to disintegrate the people without realising the consequences.”