According to a report published by the Centre for Monitoring Indian Economy Pvt. Ltd for August in this year the unemployment rate in India is 7.8 per cent 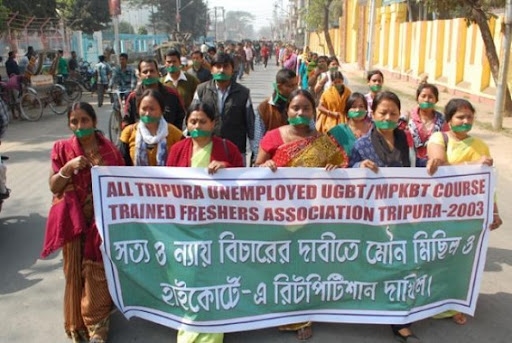 Udaipur (Tripura): It is an important figure that recorded 15.6 per cent unemployment in north-eastern state Tripura in August which figures occurs due to some political issues and lack of government planning in view to consider the suitable solution for an unemployed person.
According to a report published by the Centre for Monitoring Indian Economy Pvt. Ltd for August in this year the unemployment rate in India is 7.8 per cent which followed by rural unemployment 7.1 per cent and urban unemployment 9.1 per cent. The data shows in case of other north-eastern states are Assam 6.7 per cent and Meghalaya 0.6 per cent.

The report of Economic Review of Tripura published by the Directorate of Economics & Statistics Planning (Statistics) Department, Government of Tripura reveals that the inadequate economic development of Tripura has a natural fall-out in terms of its capacity to generate employment opportunities. The organised private sector employment is practically missing here in the state.

The outcome of a low level of development is low-income levels of people and a high level of unemployment. This has resulted in a very low tax base and therefore, limited scope for internal resource generation.

According to SDG India Index- 2019-20, published by NITI Aayog where the unemployment rate in Tripura is 6.8 per cent. The estimates of the workforce are obtained using the results of large-scale sample surveys on employment & unemployment conducted by the National Sample Survey Organisation (NSSO) and decennial population census carried out in the country by the Office of Registrar General of India (RGI) and Census Commissioner.

To bridge the data gaps, quinquennial rounds of National Sample Survey (NSS) on employment and unemployment and Economic Census were conducted regularly.

The report of Economic Review of Tripura has suggested in the report that entrepreneurship development, rural market linkages with Government’s financial support are required to reduce poverty and unemployment. The state of Tripura has not been able to exploit natural resources due to geographical isolation and communication bottlenecks.