Failing to submit the memorandum in person, in a letter to the Vice President, Chakraborty wrote that in any healthy democratic set of government, along with the ruling, the opposition parties are equally important and should respect each other. 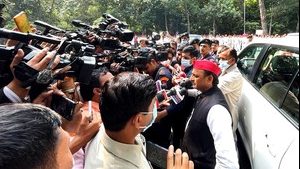 Agartala: Youth Trinamool Congress (YTC) of Tripura has written to Vice-President M Venkaiah Naidu after being denied to meet him with a memorandum during his recent visit seeking steps for restoring democracy in the state.

The YTC Convener Baptu Chakraborty alleged that they had requested the Chief Secretary of Tripura to arrange a brief meeting of the YTC delegation with Naidu during his two days state visit but they didn’t get any response from the government and said, “Chief Secretary doesn’t have the courtesy to respond us.”

“The Vice President of India has no political identity or administrative colour. Any bonafide Indian has every right to meet them especially when he visits a state with a message for strengthening democracy. He might have got administrative programmes but this was the duty of the Chief Secretary to convey our request to him and revert back to us with his response but he (CS) failed to do it,” Chakraborty said.

Failing to submit the memorandum in person, in a letter to the Vice President, Chakraborty wrote that in any healthy democratic set of government, along with the ruling, the opposition parties are equally important and should respect each other. But it is very unfortunate that in Tripura at present under the leadership of Chief Minister Biplab Kumar Debit it seems the rule of a single party.

The letter alleged, “The Opposition parties are not being allowed to organise any political program in the state. There have been not only several incidents of threats by the ruling party hooligans and carrying out organised attacks on the opposition party supporters and their property including a repeated attacks on the vehicle of Trinamool national general secretary Abhishek Banerjee who is also a Member of the Parliament.

It further alleged that the attacks were being carried out in front of security forces and police and claimed that police often does not register cases or take FIRs Baptu was also informed about the attacks on journalists and media houses by the ruling party cadres.

He also informed the VP about the unemployment problem in the state and said that the state government has totally failed to keep its promise laid down in the ‘Vision Document” released by the then Union Finance Minister late Arun Jaitley before the 2018 assembly election.

“We brought the issues to your knowledge to apprise the appropriate authority so that democracy can be revived in Tripura where the opposition parties and media can play the role of constructive criticism and raise the voice of the people for the development of the state,” the letter added.