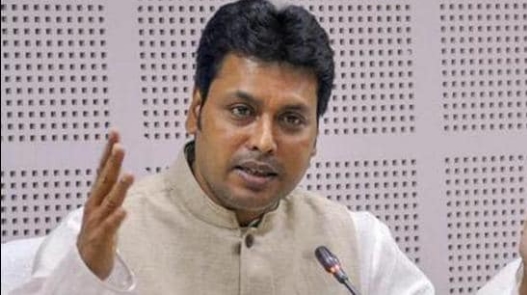 Agartala: The most popular and widely network cable new channel of Tripura PB 24 has been disconnected from the loop of the service provider yesterday immediately after telecasting the harassment and assault of All India Trinamool Congress general secretary and Lok Sabha MP Abhisekh Banerjee along with other leaders and 12 arrested youth leaders of TMC at Khowai police station.

Besides, relentless attacks and atrocities on journalists and media houses, the Tripura government led by Biplab Kumar Deb in three and half years of rule have shut down four popular news channel including PB 24 as of now allegedly for telecasting news and programs inconvenient for the government and ruling party, which has triggered a serious reaction in the media circle.

According to the report, Reliance backed cable service provider Hathway and GTPL have been operating in Tripura facilitating local cable-based channels to telecast their programs in the state. The franchise of the service providers has allegedly come under the pressure of the state government and the ruling party. In any case, they felt embarrassed and immediately disconnected the channel from the telecast network illegally.

The largest media forum of Tripura Assembly of Journalists’ (AOJ) condemned the attack on PB 24 and four others – Channel Din Raat, Akash Tripura, Hallabul and Mrinalini ENN and demanded to restore their telecast immediately and urged the government to step back from such vendetta against media paying respect to democracy. All the channels have been with AOJ and in a movement seeking withdrawal of threat to media by Chief Minister Biplab Kumar Deb in September last year.

AOJ Spokesperson Samrat Choudhury said that Channel Dinrat and Akash Tripura were shut down soon after the BJP-IPFT government came to power in 2018 illegally based on political consideration and pressure from the government and ruling party. Hallabul also faced the same consequence for not joining the propaganda of the Biplab Kumar Deb government.

Mrinalini ENN was initially warned and illegally harassed by the District Magistrate for hosting the program where Chief Minister Deb was criticized by the viewers for his comment regarding Amit Shah’s plan to install the BJP government in Nepal and Sri Lanka. Recently, after hosting a programme on large scale violence and atrocities of BJP cadres across the state, Mrinalini ENN was disconnected from the set-top service in the cable network, he said.

However, Mrinalini ENN served notice to Hathway and GTPL for illegal disconnection and the matter is set to go to court. In the case of PB 24, reportedly the channel authority was pressured and persuaded not to telecast any news or programmes troublesome for the government and ruling party instead to join the propaganda team but the channel disagreed.

“Despite having required viewership of PB 24 and handsome circulation of the newspaper, Pratibadi Kalam of the same ownership was not given government advertisement only for not joining to propaganda. They made a live telecast of the harassment meted out on Abhisekh Banerjee and his team by BJP workers and police in the police station and then their signal has been shuttered, which is undemocratic and unlawful,” Choudhury added.