So far, free drinking water connection has been given to 2.92 lakh households in the state under Atal Jail Yojana, state Drinking Water and Sanitation Minister Sushanta Chowdhury said here. 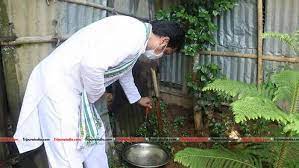 Agartala: The Tripura government will provide safe drinking water facilities to all nine lakh houses in the state within the next two years, a senior minister said on Saturday.

So far, free drinking water connection has been given to 2.92 lakh households in the state under Atal Jail Yojana, state Drinking Water and Sanitation Minister Sushanta Chowdhury said here.

He said while the Jal Jeevan Mission will work towards delivering piped water supply to every house, Atal Jal Yojana will pay special attention to those areas where groundwater is very low. To incentivise Gram Panchayats to perform better in water management, Chowdhury said a provision has been made in Atal Jal Yojana, in which better performing Gram Panchayats will get a larger allocation.

Applauding the success of the Water Mission of Prime Minister Narendra Modi, Chowdhury pointed out, “Till 2019, only 3 Crore out of 18 Crore rural households of the country had access to piped water supply and in Tripura, it was only 10 percent of the households. In last two years despite the Covid pandemic, almost two lakh families were given water connections and the central government set the target to deliver clean drinking water to the remaining 15 Crore through pipes by 2024”.

To resolve the drinking water issue in Agartala Municipal Corporation (AMC) area, Chowdhury accompanied by the Minister of Urban Development Santana Chakma held a high-level meeting on Friday and ordered necessary steps to implement the schemes.

There are plans to install a few more water treatment plants in some areas in the city besides undertaking efforts to expedite the process for providing purified drinking water, he maintained.