Reacting to IPFT’s Delhi Abhiyan, TIPRA leaders alleged that such programme reflected IPFT’s inability to achieve the goals despite being in the government 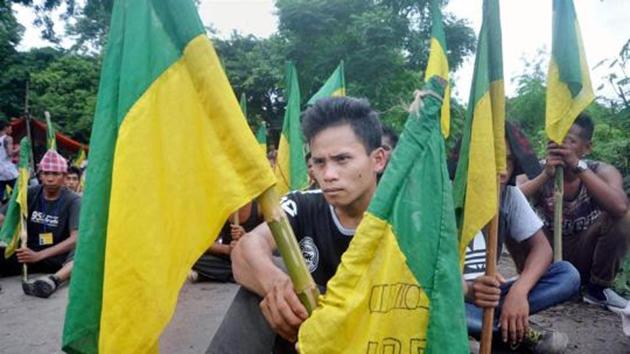 Agartala: The ruling BJP’s alliance partner IPFT in the Tripura government has announced to hold an agitation in Delhi on August 23 to press for their demand for a separate state elevating the status of Tripura Tribal Areas Autonomous District Council.

The party had been fighting for the demand for the last 25 years and joined hands with BJP in the last assembly elections. There was a specific promise to empower the indigenous community and upgrade the status of ADC, which were the important conditions for forging an alliance with the BJP in assembly but so far there is no progress, stated IPFT President and Revenue Minister N C Debbarma on Sunday.

The union home ministry had constituted a high power committee and they had meetings with the stakeholders over the demands soon after the new government assumed office, but there was no development afterwards, Debbarma pointed out adding, “We had several rounds of meeting with the prime minister, home minister, defence minister, BJP national president and top leaders of the party to push for our demand.”

In Delhi Abhiyan, the party would reiterate its core demand of separate statehood from the geographical area that falls under ADC and as a part of the demonstration, hundreds of its supporters will hold protests at Jantar Mantar and the delegates will leave for Delhi on August 18 next.

He maintained that the leaders have unanimously resolved to undertake activities to ensure the party’s growth and expansion and without naming royal scion and Chairman of ADC’s ruling party TIPRA Motha Pradyot Kishore Debbarman claimed despite the existence of other parties on hill, IPFT has the biggest base and people prefer to remain with the party, as IPFT has been fighting for the indigenous community since the beginning.

However, TIPRA leaders rubbished the claim of N C Debbarma and alleged that he has been a senior most tribal leader of the state and indigenous people believed him before the 2018 election with a hope that the development of tribal and hills would accelerate once IPFT becomes a partner in the government but it appeared completely reversed.

“After getting into the power corridor and policy making level, IPFT leaders forgot their commitment and got engaged in personal well-being. They have become puppets in the hands of BJP now. As a result, since last general election people started rejecting them and in ADC they reduced to zero and now indirectly work as B-team of BJP,” said a senior TIPRA leader.

Reacting to IPFT’s Delhi Abhiyan, TIPRA leaders alleged that such programme reflected IPFT’s inability to achieve the goals despite being in the government and said, “They cheated the innocent people of Tripura and now trying to get engage in the next innings for 2023 but this time people wouldn’t support, as their game plan is exposed. We suggest they merge with us and fight together from a single platform to defeat BJP.”