The former Chief Minister said the speech of Prime Minister was full of false and distorted information about Tripura, by which he insulted the people of the state and directly encouraged the misrule of Biplab Kumar Deb government in the state 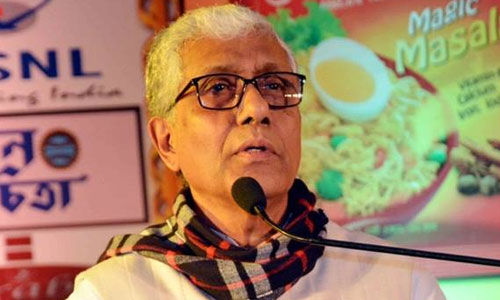 Agartala: The former Tripura Chief Minister and CPI-M politburo member Manik Sarkar came down heavily on Prime Minister Narendra Modi for his speech on the celebration of the 3rd anniversary of the BJP-IPFT government here on March 10 and said it was intended to misguide the people of the country.

Addressing media Sarkar here today alleged, “The speech of Prime Minister was full of false and distorted information about Tripura, by which he insulted the people of the state and directly encouraged the misrule of Biplab Kumar Deb government in the state. The people of Tripura never accept such cooked stories and defamatory statements from PM.”

“Yes, I agree with one of his statements that what Tripura sees in three years never happened in 30 years. Because before 2018 people never had witnessed false promises, people never sold children for food, democratic institutions and freedom of speech were never curtailed before, there was no cut money business in government departments, there was no patronise from the government for criminal activities and there was no such a big queue of unemployed in Tripura in 30 yrs what PM’s beloved state government introduced in Tripura,” Sarkar observed.

Now, the BJP-IPFT government has initiated providing jobs in government departments at various ranks through private agencies violating the public service rule, he said adding that they promised to give 50,000 jobs every year but in three years the government could not give even 5000 jobs to the education department.

He alleged in the last three years whatever projects have been inaugurated in the state was initiated by the previous government. Hospitals, schools, roads, international connectivity, highway development, airport, irrigation development and up-gradation of agriculture all began during the left front government but PM in his speech tried to snatch away the credit for his government, which is shameful, Sarkar pointed out.

“Tripura became a power surplus state in 2015 after the inauguration of the second unit of Palatana gas-based combined cycle – one of the biggest clean development mechanism power projects of the country soon after Narendra Modi was sworn-in as Prime Minister. Since 2016, Tripura has been trading 100 MW of power to Bangladesh. But the Prime Minister claimed credit for it for his government which came to power in 2018,” Sarkar underlined.

“I am surprised how the Prime Minister makes such irresponsible statements in public sitting in Delhi that during the left front regime government employees were not getting a regular salary. Tripura is one of the few states, which had long ago introduced the credit salary on the last working day. Rather after the BJP government came to power, it was delayed to the first working day of next month,” Sarkar added.