Reiterating the Government’s commitment to giving maximum benefits to the people, Joykumar Singh said for a welfare society all have to be contributed in their fields and maximum benefits should be reached to the needy people. 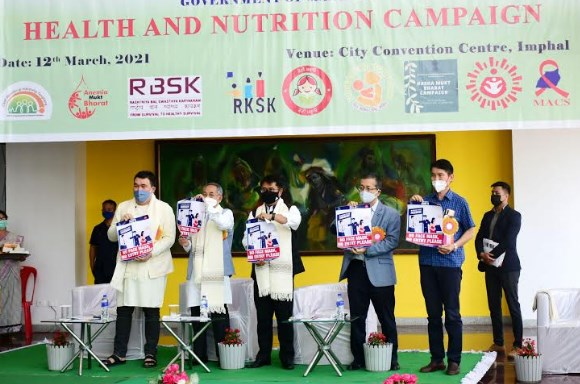 Imphal: As a part of the ongoing celebration of 4 years of achievement of the BJP led government in the State, Deputy Chief Minister Yumnam Joykumar Singh today launched Health and Nutrition Campaign at City Convention Centre in Imphal. The campaign which is being organised as a part of Prime Minister’s POSHAN ABHIYAN (PM’s Overarching Scheme for Holistic Nourishment) aims to make a holistic approach to create awareness for health and well being among the people.

Speaking at the launching function as Chief Guest, Deputy Chief Minister said with the completion of 4 years of citizen-centric governance, the State Government has been able to achieve advancement in different sectors in the State. He claimed many new schemes meant for benefiting people have been implemented and benefited the needy people.

Reiterating the Government’s commitment to giving maximum benefits to the people, Joykumar Singh said for a welfare society all have to be contributed in their fields and maximum benefits should be reached to the needy people. It is in this direction that the State Government has been working and many tangible effects are being seen in the past four years.

While acknowledging the fact that many developmental programmes and schemes are yet to reach in different areas especially the periphery/interior areas of the State, he said, making awareness about the programmes and schemes is the priority area where authorities especially the departmental officials should work so that people can be in touch with the same and benefitted. “Go to Hills” & “Go to Village” are being organised through which maximum enrolments can be made by the people for various schemes and programmes and benefitted them.

Lauding the efforts made by Health & FW and Social Welfare Departments, the Deputy Chief Minister said, such campaigns will definitely help to aware people about the vital needs and steps which are to be followed for a healthy human being. He also appealed to co-operate with the State Government’s initiatives for making a well developed healthy society.

Social Welfare Minister Okram Henry Singh while speaking at the function said, various programmes and schemes have been implemented for benefitting people beginning from pregnant women upto the aged in the State. Special programmes for differently able persons have also been launched and implemented. He also urged the officials for organising awareness campaigns throughout the State.

Advisor to Chief Minister (Health) Dr. Sapam Ranjan Singh also spoke on the importance of attaining a healthy society for enabling a developed State. Altogether, 23 Stalls opened at the Campaign which was jointly organised by Health & Family Welfare Department and Social Welfare. Anganwadi Workers & Helpers, health workers and students participated among others in the Campaign.