The job aspirant Bulti Das, a seven-month-pregnant lady was shifted to the hospital on Monday night who had allegedly been kicked by the policemen in front of the minister’s house 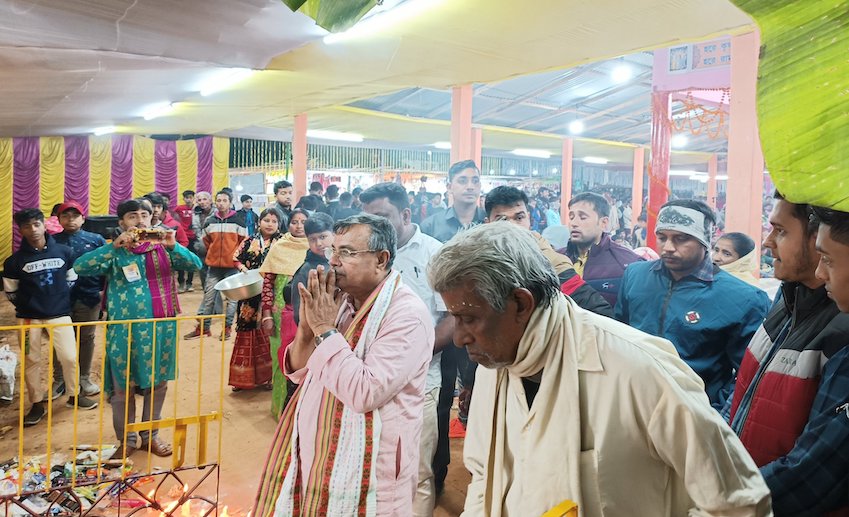 Agartala: Tripura education minister Ratan Lal Nath was accused of instigating paramilitary forces against the job-seeking qualified graduate and post-graduate teachers who had gone to meet the minister at his residence on Monday.

The security forces have beaten up the job aspirants mercilessly on the road and left at least 47 people including an expecting mother injured seriously. At least five persons were shifted to the hospital with multiple fractures in their legs and hands and serious head injuries.

The job aspirant Bulti Das, a seven-month-pregnant lady was shifted to the hospital on Monday night who had allegedly been kicked by the policemen in front of the minister’s house and she had fallen on the road during a scuffle with the security personnel.

She alleged male police personnel touched her inappropriately and tortured her brutally.

“During the meeting with the education minister at his residence, Nath shifted his earlier stand to appoint less than a thousand qualified graduate and post-graduate teachers against the vacancy of 6000 and misbehaved with the delegation who was called for discussion from the agitation.

He used slang and blamed us as ‘broker of opposition political parties and made it clear no way we shall get any job,” alleged Rahul Roy, an injured protestor.

He further alleged that the minister had warned them that unless they leave the place immediately, police would be asked to open fire. A few minutes later, he came out from the house with high security, and while sitting in the car, he indicated to police to disperse the crowd – abruptly CRPF, TSR, and armed policemen resorted to brutal torture on the gathering of 200 job seekers.

Most of them managed to run away but some were encircled by police and beaten up brutally for around 10 minutes. When the residents of the area came out against the police action, security personnel stepped back and a fresh set of police came with a vehicle to take them to the hospital.

The opposition CPM, Congress, Trinamool Congress, and TIPRA Motha condemned the role of the education minister in mobilizing police against the job seekers and sought the attention of the chief minister to deal with the grievances and alleged, “Ruling BJP has lost sense after people started rejecting them for non-compliance of the promises and now resorted to state-sponsored violence.”

Congress MLA and former BJP minister Sudip Roybarman alleged, “The BJP ministers and leaders continuously lie to the people and when they find no option use police or criminals to subjugate the public voice.”

He pointed out that before coming to power, BJP had promised to give 50,000 jobs annually and all the vacant posts in government departments would be filled up, but in last five years they didn’t fill up even 10 percent of the vacant posts, and hardly a few thousands of youths got employment in BJP’s regime, which put Tripura in the top of the unemployment graph.