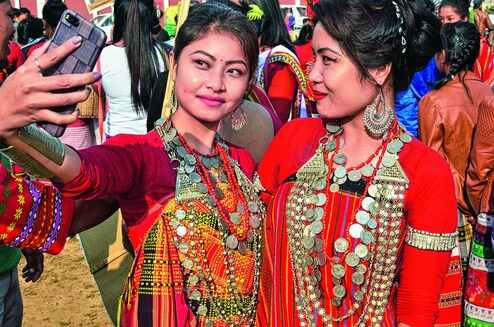 Agartala: In the midst of the controversy over the imposition of Hindi in Northeastern states, the BJP government at the centre has introduced Kokborok – a language spoken by tribals of Tripura and a few other states – as a subject in the CBSE curriculum at school level, a parliamentarian said on Sunday.

The Tripura government has recently introduced Kokborok for undergraduate courses in 22 colleges and recruitment of teachers for the subject is underway. However, unless students at the school level get the opportunity to learn Kokborok in the framework of the syllabus, how can they study Kokborok at the college and university level, Tripura pointed out.

adding that he had raised the issue in parliament in March last year, which has now borne fruit. “I thank Prime Minister Narendra Modi and Human Resource Development Minister Dharmendra Pradhan for including the Kokborok language in the curriculum of the Central Board of Secondary Education, which enables the students from Kokborok speaking communities to learn it as a subject,” he stated.

The BJP-IPFT government in Tripura has introduced the CBSE curriculum in the state in 2020 besides handing over more than 100 government schools under the academic administration of CBSE, which was a long-standing demand of the state.

Welcoming the decision to include Kokborok in the CBSE curriculum, Tripura Pradesh Congress Committee President Birajit Sinha demanded the centre scrap its move of imposing Hindi in Tripura, where the main official and public languages are Bengali and Kokborok.

Sinha accused Union Home Minister Amit Shah of raising the banner of Hindi at the cost of other languages, by referring to his recent statement. The constitution does not support the imposition of Hindi, rather there is a provision that all languages should be treated equally, he said, demanding Bengali and Kokborok should remain the prime languages in Tripura.

Meanwhile, the Roman Script for Kokborok-Choba (RSKC), a conglomeration of 56 indigenous socio-cultural organisations of Tripura, has opposed the move to make Hindi a compulsory subject till Class X in the Northeastern states. They claimed that making Hindi compulsory in the Northeast is nothing but “a blatant deviation from constitutional provision”.