The 27–year-old youth Shubhrajit Dhar, who claimed to be a staff of Tripura Medical College (TMC) has been arrested. 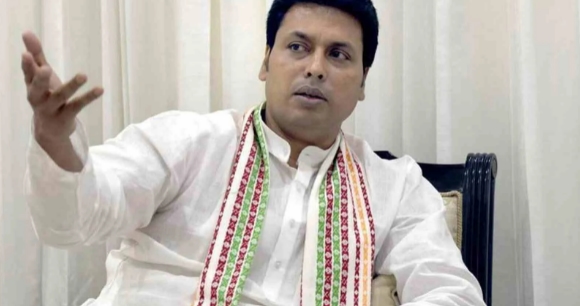 Agartala: Tripura Chief Minister Biplab Dev had a close shave when a car allegedly driven by an intoxicated youth almost hit him during his night walk in the VIP zone here on Thursday night, police said.

The chief minister was unhurt, but the vehicle dashed into a roadside wall and slid into a drain.

The 27–year-old youth Shubhrajit Dhar, who claimed to be a staff of Tripura Medical College (TMC) has been arrested.

Dhar, a non-medico working in the orthopaedic department of TMC hospital and a resident of the Gandhighat area of the city, was found to be intoxicated and two bottles of liquor were recovered from the vehicle.

The senior police officials interrogated him for long on Thursday night and said, “Dhar was intoxicated and had no intention. Suddenly after seeing the Chief Minister along with security personnel while negotiating a curve, he lost control and hit the nearby wall. The CM escaped the accident narrowly due to the high alert of his security personnel.”

According to the police, Deb was on a night walk in the colony behind his residence at around 11 P.M. While passing by the residence of the leader of the opposition Manik Sarkar, the car came suddenly from the opposite direction close to the chief minister and skidded into the drain.

Immediately, the security staff detained the driver and handed him over to West Agartala police station. They escorted the Chief Minister safely to his residence.

The accused Dhar has been produced in the court for police custody to facilitate for further investigation. The additional director general of police (Crime) Puneet Rastogi has been asked to inquire about the incident and directed the police to launch a special drive against rash driving.

Three months ago in a similar incident near IGM hospital, three intoxicated youths were arrested when their car overturned on the road while the Chief Minister was walking.