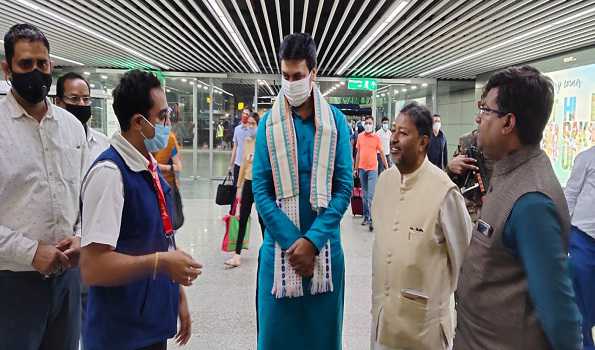 He is scheduled to attend a roadshow covering four assembly constituencies – Habra, Barasat, Madhya gram and Amdanga followed by addressing two election rallies in the afternoon at Rathtola of Barasat and Dattapukur railway yard of Amdanga seeking vote for BJP candidates in upcoming assembly elections.

This is the first election rally of Deb in West Bengal assembly election after his predecessor veteran CPI-M leader Manik Sarkar addressed several rallies in West Bengal against the BJP rule in Tripura for the past three years, which have become an important campaign tool for ruling Trinamool Congress and opposition Congress and CPI-M against BJP.

Sarkar had accused Biplab Deb led BJP government in Tripura of not complying with any of the poll promises, the jobless situation in the state, large scale corruption, looting of public fund, leasing out local contracts to outsiders, deteriorating law and order and step-motherly attitude against MLAs won elections with BJP tickets after coming from other parties, which become a ready reference in West Bengal against BJP.

According to BJP sources, after the daylong election campaign, Deb is scheduled to fly for Guwahati at night and from there tomorrow he will likely to go to Delhi to meet the senior leaders to cease the dissidence against him that is affecting the poll prospect of BJP in Assam and West Bengal.

“Besides, the annoyance of alliance partners in the government IPFT against BJP, as many as 28 MLAs of the party raised voice against Biplab Deb for his alleged vindictive activities towards his party leaders, which become a threat for the existence of the government in Tripura. The inner conflict in BJP and it’s alliance in the government have widened the scope for the opposition,” said a senior BJP leader here.