Chakraborty declined to comment on the query about any action against Das for anti-party role. 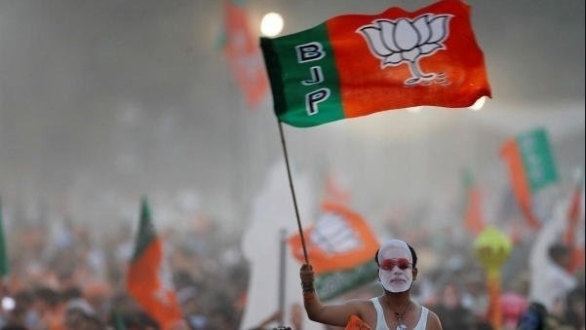 Agartala: The ruling BJP in Tripura has faced an embarrassment with the open statement of its MLA and RSS activist Ashis Das against Chief Minister Biplab Kumar Deb, Prime Minister Narendra Modi.

He openly criticised BJP after offering puja at Kalighat in Kolkata today, which he termed as ‘cleaning of sin’ being in BJP for over a decade.
Das had been critical against BJP leadership two days ago, came out from Trinamool Bhawan in Kolkata and had praised West Bengal Chief Minister and Trinamool Congress supremo Mamata Banerjee for her success in Bhabanipur by-elections. He also hoped that the country would see Mamata Banerjee as the next Prime Minister of India in 2024, the process of which has already been started.

“The BJP has cheated the people of Tripura with all false promises and in my three and half year old tenure I found BJP central leaders including party president, prime minister and home minister always shield the corrupt, illiterate and criminals and oppressed the genuine party workers and leaders who want to serve the people in the philosophy of Pandit Deendayal Upadhyaya and Syamaprasad Mukherji,” Ashis Das alleged.

He pointed out that Tripura Chief Minister Biplab Kumar Deb has failed to manage 36 of his MLAs and around a hundred BJP leaders in three and half years of his tenure. From the very first day, he was indulged in corruption and paved the way for communists. He spoke all rubbish on a number of occasions and because of Deb’s irresponsible statement India’s most trusted friends Nepal and Sri Lanka became hostile but BJP central leadership kept quiet.

“All senior leaders of BJP, most of the MLAs, ministers, media and bureaucracy have been hostile due to Biplab Deb’s vendetta politics, corruption and undemocratic activities over the years. We have raised those points in detail at the top level of BJP seeking his removal for the betterment of the party. We have apprised the national leaders how Deb is helping CPI-M. Unfortunately, BJP top brasses sacrificed the party for Biplab Deb, which is not acceptable for me,” Das told media.

Indicating his next political destination Trinamool congress, Das said Modi has been selling out most government properties to private parties. Modi had motivated thousands of countrymen saying, Na Khaunga Na Khane Dunga, Desh Nahi Mitne Dunga, Deshi Nehi Jhukne Dunga Desh Nehi Bik Ne Dunga but now it has become a popular jumla (joke) in the country and we who are being blamed for propagating such ideas. Today, all corrupt, criminals, lumpen and cheaters are in the steering of BJP.

The BJP state committee has become defensive after Ashis Das’s statement and party spokesperson Subrata Chakraborty said, “Party is keeping a close tab on him and we believe Ashis Das is somehow misguided, otherwise, there is nothing to praise Mamata Banerjee. The party will take the call at the appropriate time.”
Chakraborty declined to comment on the query about any action against Das for anti-party role.