The study team has been collecting their blood samples every three months to count the level of antibody, which is identified as a fighter against the SARS-CoV-2 virus and see the changes of its level and character. 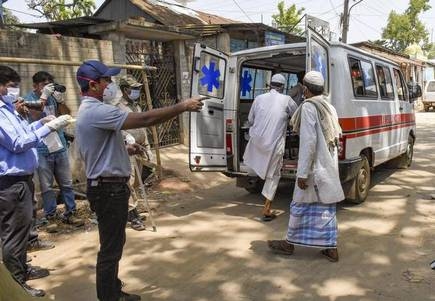 Agartala: With the successful completion of administering the first dose of vaccine against Covid-19 among 90 per cent of the total eligible population, the Tripura government has initiated two research projects with the support of the World Health Organisation (WHO) and All India Institute of Medical Science (AIIMS) New Delhi to ascertain the immunity level of the people to fight against Covid.

According to the report of Agartala Govt Medical College (AGMC), the Department of Microbiology and Department of Community Medicine have undertaken the study in mixed populated (tribal and non-tribal) locations based on the criteria set to achieve the specific objectives to determine the level of antibody built up to fight against coronavirus in three types of sample – after getting the first dose of vaccine, after receiving double dose and three weeks after infected with Covid virus.

The study team has been collecting their blood samples every three months to count the level of antibody, which is identified as a fighter against the SARS-CoV-2 virus and see the changes of its level and character. Although the study is targeted to be completed in March next year, the mid-term appraisal of the project indicated that the children below 18 -yrs of age have already developed antibodies at the resistance level, said one of the experts not willing to be named on ethical obligations.

“We are hopeful if our population including children strictly follow the Covid appropriate behaviour and virus is not mutant with a new character, the impending threat of the third wave might not affect much in Tripura,” the expert opined adding that people, in general, have developed good habits in last 16 months during Covid pandemic that also, become a strong shield to fight many infectious diseases.

He, however, pointed out that AGMC has sponsored another research project at state funding to ascertain the antibody level of the general people. The study aimed to measure the level of an antibody of the people who have taken a double dose of vaccine, the level of antibody among the mass after being negative who were infected without vaccine and the people being positive after getting double shots of a vaccine against SARS-CoV-2.

“Except for Israel, no country has yet to decide the vaccination of the third dose, as no comprehensive research result is not available to ascertain how long the effect of the vaccine will be active in the human body, based on which next level of the fight against Covid would be designed. We have taken up a project to monitor the active status of antibodies in our designated samples,” he maintained.

Initially, a controlled group of samples most specifically, health workers, has been identified with certain criteria and ethical agreement to conduct the study and the active status of antibodies to fight against coronavirus in their body would be monitored constantly over a year. In the second stage now, open samples (common people) would be taken for the same study to draw a conclusive decision, which may help the policymakers to decide the next course of action, he added.

The experts mentioned that before launching the vaccination programme in Tripura, AGMC had conducted a short study to enumerate the level of antibody against SARS-CoV-2 and it found about 34 per cent of people of Tripura had active antibodies but the study couldn’t determine the duration of the active phase.

Meanwhile, health officials stated that as many as 11 urban areas including Agartala and 244 villages of 1100 have already been covered with 100 per cent vaccination while one-fourth of the population above 18 -yrs received both the shots of vaccine and over 90 per cent of the eligible people have got the first dose. The rate of Covid infection has remained at 5.3 per cent but the fatality rate declined to below one per cent in Tripura.