The Rubber Board officials here along with Director Industries and Commerce Dr P K Goel flagged off the latex sheet-laden lorry in a simple ceremony. 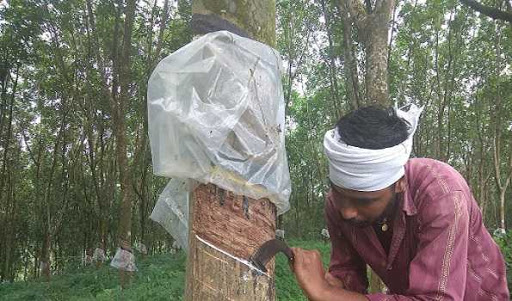 Agartala: The trade of natural rubber between Tripura and Nepal was launched yesterday here with the movement of first consignment of rubber to Eastern Nepal.

The Rubber Board officials here along with Director Industries and Commerce Dr P K Goel flagged off the latex sheet laden lorry in a simple ceremony.

According to officials, usually, Nepal imports raw rubber from Vietnam and Malaysia but Rubber Board of India (RBI) owned marketing company Manimalayar Rubbers Pvt Ltd in collaboration with a Nepali company based in Biratnagar of bordering Bihar has imported 18 MT rubbers in the maiden consignment from Tripura.

Tripura produces the best quality latex after Kerala over the past two decades because of it’s climate and RBI has been promoting rubber cultivation on a large scale that boosts the rural economy of the state.

However, in recent years with the lifting of trade barriers of synthetic rubber from Malaysia, Vietnam and Indonesia, latex prices fell badly, which hit the production in Tripura.

Despite having the best quality, Indian industries have also shifted their supply chain to imported rubber and at the same time, the export volume of Indian rubber has been reduced substantially over the past few years. At the dwindling phase of business, exporting raw rubber to Nepal has become a silver lining for the cultivators.

“This is the first time, Nepal has shown interest in importing rubber from Tripura, which can be proved a game-changer for the rubber sector”, said Joint Rubber Production Commissioner of RBI, Girijamony K A adding that within a week the consignment would be delivered and if they satisfied with the product, the supply would be continued.

According to a report, Nepali companies have imported rubber for utilization in manufacturing footwear. At present Tripura has been supplying raw rubber to the manufacturing industries of Punjab and Maharashtra besides, catering to small manufacturers in the industrial estates of Tripura.