The cumulative hike of flights has indicated the volume of business and interest for Tripura have increased manifold. 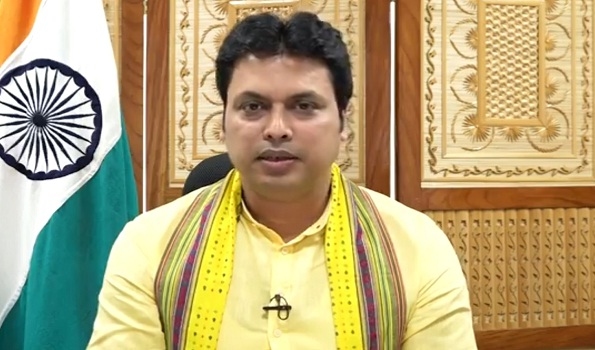 Agartala: Tripura Chief Minister Biplab Kumar Deb on Monday claimed that Prime Minister Narendra Modi has already given HIRA to the people of Tripura, as he had committed before the last assembly elections.

HIRA stands for highway, internet way, railways and airways, which got a massive boost under the BJP-IPFT government in three and half years, he said.

While addressing a party rally at Kailashahar of Unokoti district, the Chief Minister rang the bell for the next assembly elections about one and half years before the schedule. He stated that the scale of investment for highway development has increased to Rs 12000 Cr from Rs 1200 Cr and the number of highways has been increased besides, quality of the roads.

The digital India movement has made an exceptional contribution to the public life and rural economy of Tripura along with bringing transparency in the governance. The digitization of ration cards has made Tripura a success in Tripura for one nation one card. By which a consumer of Tripura can withdraw his monthly ration from any part of the country and from one location to another in the state as well according to convenience, Deb stated.

The Chief Minister, however, underlined that more than 1200 Common Service Centres (CSC) have been operating in the state at present which was less than 400 in number during the left front regime. Because of online governance and services, people residing in distant villages have been using the CSC facilities that increased the income of the CSC operators up to Rs 40,000 per month.

“During the Left Front days, there were few trains connecting Tripura and leftists had to organise protests and rallies for getting train services but, the Modi led NDA government has given all kinds of trains including Rajdhani and Hamsafar express along with other railway services without any demand or agitations. Now, Tripura is well connected by surface transport with the rest of the country,” Deb pointed out.

The air fleet has also increased those connecting Agartala with all the major cities of the country and two daily flights to Delhi, he said adding, “Not even 10 people come or go to Delhi in those days and now more than 300 passengers are travelling to Delhi.

The cumulative hike of flights has indicated the volume of business and interest for Tripura have increased manifold.

Without naming Trinamool Congress, Biplab Deb alleged, “A monkey party (Bandarer dal) from West Bengal is trying to misguide the people with the claim of pro-people governance, but if we compare with the state GDP of Tripura with West Bengal, our position is still much better despite having lots of difficulties and challenges.

Health, education and quality of life everywhere Tripura is much ahead of West Bengal.

He announced that over 2300 voters from other parties, mostly belonging to minority communities that have joined BJP in today’s programme after over 3000 voters from CPI-M and TIPRA Motha claimed to join BJP at Sabroom in South Tripura.