"Right from that first meeting, our friendship went beyond the trappings of office and the shackles of official protocol." 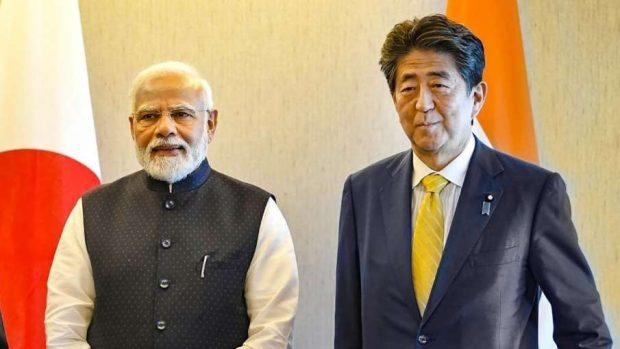 One day national mourning was declared by Prime Minister Narendra Modi to pay respect to the former Japan PM, who died after being shot at a campaign in the Nara region of Japan.

Tri-color has flown half-mast at Indian missions in other countries as well.

Ruling NDA’s Presidential candidate Draupadi Murmu meanwhile canceled her trip to Kolkata in the wake of the one-day national mourning,

Japan’s former prime minister Shinzo Abe was shot on Friday while campaigning for a parliamentary election.

Prime Minister Narendra Modi said he was “shocked and saddened beyond words”.

The Prime Minister, in a blog post on his personal website titled “My Friend Abe San”, said ” Shinzo Abe, an outstanding leader of Japan, a towering global statesman, and a great champion of India-Japan friendship – is not among us anymore. Japan and the world have lost a great visionary. And, I have lost a dear friend.”

Modi said he first met Abe in 2007, during his visit to Japan as the Chief Minister of Gujarat. “Right from that first meeting, our friendship went beyond the trappings of office and the shackles of official protocol.”

” I will always cherish the singular honor of having been invited to his family home in Yamanashi prefecture, nestled among the foothills of Mt. Fuji,” PM Modi added.