This is India's third medal of the ongoing Tokyo Olympics 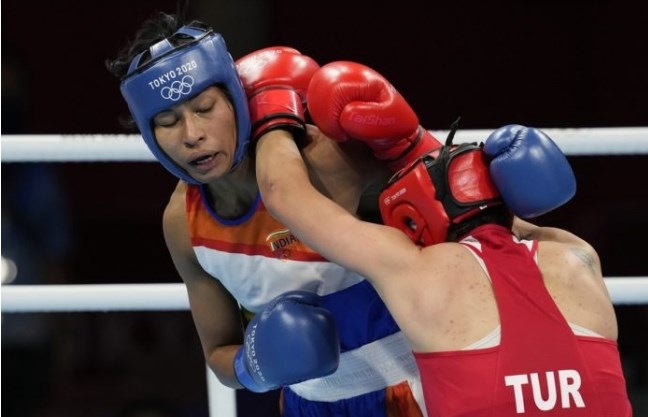 New Delhi: India’s Lovlina Borgohain on Wednesday went down in the semi-final of the women’s welterweight (64-69kg) category to Turkey’s Busenaz Surmeneli to settle for a bronze medal. This is India’s third medal of the ongoing Tokyo Olympics, Hindustan Times reported.

Looking to script history by becoming the first-ever boxer from the country to enter an Olympic final, the pugilist from Assam was no match in front of the reigning world champion of the division, as she lost all three rounds with a unanimous decision from the five judges going in favour of the Turkish boxer.

Borgohain might have gone down but she has become only the third Indian boxer to win a medal at the Olympics. Six-time world champion Mary Kom clinched bronze at the 2012 London Olympics, while Vijender Singh bagged bronze in Beijing in 2008.

Competing in the Welter (64-69kg) event, the bronze medalist at the 2017 and the 2021 Asian Championships defeated, Nadine Apetz 3-2 in the round of 16 bout. Three days later in the quarterfinal, she outpunched Chinese Taipei’s Chen Nien-Chin 4-1 to storm into the semifinals and ensure India another medal at Tokyo 2020.

Lovlina, the first-ever woman from Assam to take part at the Olympics, battled against the wretched Covid-19 in October 2020, just hours before she was about to board a flight to Italy along with the Indian contingent for a training-cum-competition trip. She was forced into isolation and despite facing all the hardships, the boxer will bring home an Olympic medal.

Interestingly, the 23-year-old, who won a bronze medal at the 2018 and 2019 World Championships, had originally started her career as a Muay Thai practitioner. It was only when she met her first coach Padum Boro, her life took a definite turn. Boro who worked at Sports Authority of India’s Shillong and Dimapur centers introduced her to boxing and since then there has been no looking back for Lovlina.

Lovlina isn’t quite happy with just a bronze in her debut Olympics but Assamese boxer said it is nonetheless a huge reward for her sacrifices in the past eight years and she would celebrate it by taking her first vacation since 2012.