Now, during BJP rule, opposition party workers, lawyers and journalists from other states have been harassed in Tripura. 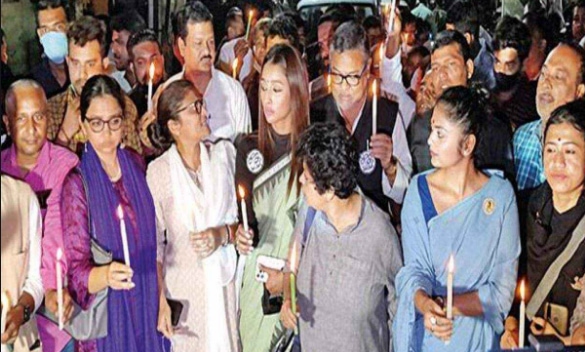 Agartala: All India Trinamool Congress has moved a contempt petition in the Supreme Court against the Home Secretary, Director General of Police, District Magistrate (West Tripura) and all-district Police Superintendents for their ‘failure’ to comply with the direction of allowing opposition parties to carry out their activities and campaign of ensuing civic body polls.

TMC Rajya Sabha MP Sushmita Dev today said that the apex court on Nov 11 last had directed the home secretary, police chief and the state authority to ensure that no political party is prevented from exercising their rights by law for political campaigning in a peaceful manner but Tripura administration has utterly failed to comply with the direction.

“In a week of the Supreme Court order, a dozen of violent incidents and attacks were made only on TMC candidates to civic polls and its leaders, which has left as many as 15 TMC workers including election candidates injured. Police didn’t arrest anybody despite registering specific FIR against BJP hooligans, instead police are harassing TMC workers and framing false cases,” Dev alleged.

The party alleged that the respondents have miserably failed to comply with the court’s order wherein they were directed to assess the threat perception and based on it provide security to the individual leaders. However, to date, not even a single candidate/leader of TMC has been provided with any security by state authority.

The TMC also prayed for appointing an observer or a committee to oversee the election process and to ensure that free and fair elections are taken place in Tripura. Not only TMC, all opposition including CPI-M has been facing attacks and violence every day. Last night, at least three TMC candidates and two senior leaders were assaulted and a few opposition supporters were attacked in several places of the state, Dev alleged.

“There is an apprehension of large-scale violence from two days before the civic poll scheduled on Nov 25 next. The BJP has booked all the hotels in Agartala for their cadres and threats to voters in the city have already started from last night. The TMC leaders and supporters have been given the warning to stay away from voting if they want to live, so we need suitable direction from Supreme Court,” Dev pointed out.

In a separate move, she wrote to DGP seeking immediate action to stop the violence against TMC workers to secure the democratic spirit in the ensuing elections to urban local bodies. She apprised the police chief that many of the TMC workers from Bengal who came to Tripura to support the party’s campaign were being harassed by the police and booked in false cases.

Dev also reminded before the 2018 assembly poll, BJP had booked all the hotels in Agartala and other places for their workers from Assam, Uttar Pradesh and Maharashtra but the then government didn’t disturb them or harass them anyway.

Now, during BJP rule, opposition party workers, lawyers and journalists from other states have been harassed in Tripura.