“We are raising all those points in the Supreme Court seeking remedies for the free and fair poll,” Bhowmik added. 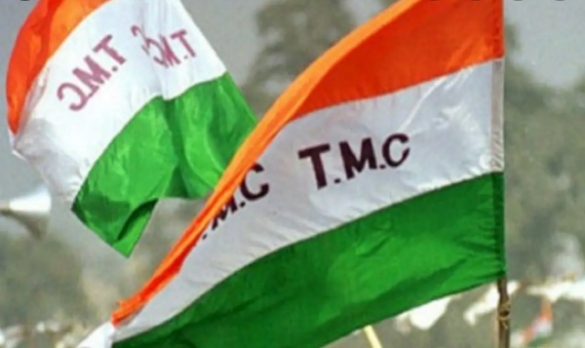 Agartala: A few hours after the assurance of no more violence by Union Home Minister Amit Saha to Trinamool congress parliamentarians, a group of miscreants attacked the house of TMC candidate of Ward No-1 of Agartala Municipal Corporation (AMC) Gouri Majumder last night and allegedly the attackers shot bullet on her but she escaped narrowly.

Police said nobody is arrested yet in connection with the attack and said the investigation has been launched to nab the culprits. Adequate security has been provided to the candidate while the additional force has been deployed in the locality and since the area is located along the Indo-Bangladesh border, BSF was also alerted.

The victim Majumder alleged that BJP cadres under the leadership of BJP nominee Ranjit Majumder carried out the attack at midnight when the entire colony was asleep. The miscreants broke the gate and ransacked the entire house raising the ‘Bharatmata Ki Jai’ slogan.

“Ranjit suddenly shot a bullet on me from a distance but I laid down on the floor to escape the attempt. After they left police reached the spot and recovered the cartridge from my house. Despite my specific complaint, police didn’t make a minimum effort to detain Ranjit, rather his cadres warned me of death in the presence of policemen,” Gouri alleged.

She further stated that the cadres threatened not to send polling agents during the elections and issued warnings in the area to non-BJP supporters for staying away from voting on Nov 25 if they want to survive and added, “We shared every detail with police but their advice was to keep ourselves safe from the rowdies. How can free and fair polls be possible under this administration?”

Meanwhile, TMC Convener Subal Bhowmik alleged that even after the assurance of Amit Saha, Trinamool candidates have been getting threat calls and intimidation. The Supreme Court had earlier directed the state to provide adequate security to the candidates and leaders of the opposition parties and restore a peaceful environment for holding fair elections but it goes reversed in Tripura.

He further alleged that Returning Officer of AMC has openly advised the presiding officers and polling officials to help the ruling BJP in the elections without fear, as there will be no CC Camera or VVPAT in the EVMs during the municipal poll. The union minister urged voters to scrap the family relationship if it contradicts with BJP and vote for BJP and win the candidates at any cost.

“We are raising all those points in the Supreme Court seeking remedies for the free and fair poll,” Bhowmik added.