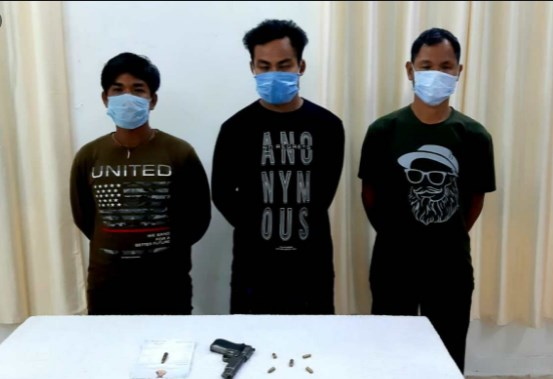 Agartala: Three militants of the banned outfit National Liberation Front of Tripura (NLFT) surrendered yesterday in the headquarters of Tripura Police here. They deposited a pistol with five live rounds of ammunition and a few extortion notices of the outfit.

They were taken to the custody of a special branch for interrogation and initial investigation revealed that they are the listed extremists and had joined the outfit in 2018 and underwent training in Myanmar and Bangladesh camps of northeast militants, police said quoting the statement of the surrendered persons.

“They were assigned to collect extortion money from the interior bordering areas of Tripura and they were doing it for last two years. Getting hardship of jungle life and ill behaviour of their so-called leaders, who are enjoying a luxurious life in Bangladesh and Myanmar, they got frustrated and joined the mainstream,” Assistant Inspector General of Tripura police Subrata Chakraborty said.

He claimed that in last few months, the state police have been getting consistent success against the remaining fraction of NLFT extremists and it compelled the underground activists of the outfit to shun the insurgency. Three days ago they fled away from Bangladesh hideout and after entering Tripura, they contacted the intelligence wing of the state police, which finally paved the way for their surrender.

Tripura ADC instructs all offices to entertain communication in Kokborok