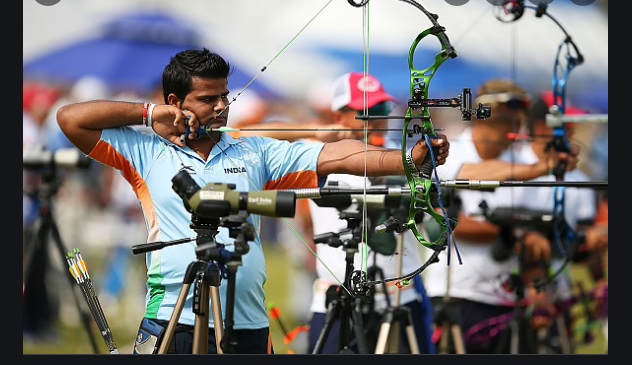 Asian Games and World Cup Gold medallist Abhishek Verma got a bye in the opening round and outclassed his rival Trinh Van Duc of Vietnam by 149-139 in the second round. He then defeated his compatriot Aman Saini by 150-143 in the third round and got better of Iran’s Mohammadsaleh Palizban by 149-147 in the quarterfinal encounter.

Mohit will lock horns with Abhishek in the semifinals to book his place in the compound individual finals.

Rishabh Yadav, who had a flying start in the tournament, registered a comfortable win in his second and third-round matches, but his campaign came to an end in the quarterfinal.

Rishabh went down fighting to Sergey Khristich of Kazakhstan in the shoot-off in a closely-fought contest and ended up scoring an identical score of 145.

In the shoot-off, both Rishabh and Sergey scored 9, but Sergey took the match as his shot was close to 10 compared to Rishabh’s shot.

Meanwhile, Jyothi Surekha Vennam was the lone women archer who paved her way into the semifinals. Jyothi defeated Le Phuong Thao of Vietnam by 146-141 in the second round and later got better of her compatriot Parneet Kaur by 148-146 in the quarter-final.

Jyothi will take on top-seeded Korean archer Kim Yunhee in the semifinal to secure her berth in the final. Other women compound archers Priya Gurjar crashed out in the quarterfinal, while Muskan Kirar lost in the second round.